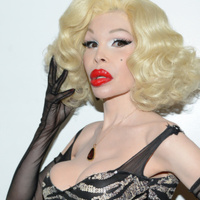 Amanda Lepore net worth: Amanda Lepore is an American model, nightclub hostess, fashion icon, performance artist, and transgender icon who has a net worth of $2 million. Amanda Lepore earned her net worth as a model, fashion icon, and performance artist. At the age of 11 she professed to her parents that she wanted a sex change operation after seeing a TV show on the subject. At the age of 15 she began designing costumes for dancers at a local strip joint. During this time she received hormones from an underage transsexual friend who accepted outfits as payment. She has received attention for her modeling, fashion, partying, and business skills. She has been the advertising face for Heatherette, MAC Cosmetics, Mego Jeans, Swatch, and more. Fashion design company Heatherette has used Lepore's image on many of their clothing and has continuously chosen her to model their brand on runways. She played herself in the film Party Monster. She has been included in many advertising campaigns for Armani, MTV, and more. Her first single, "Deeper," is a 2003 trance dance song written by Wigstock drag queen Lady Bunny. In 2005 she released her first album and in 2007 she released two remix albums. She was a part of True Colors Tour 2007, a 15-city North American benefit tour. In October 1999 Swatch released "Time Tranny", a watch designed by LaChapelle with Lepore on the face displaying a printed crack on the glass and marble stripes as the background. In 2006, Integrity Toys launched an Amanda Lepore doll produced by Jason Wu as a benefit for AIDS charities. She has a line of cosmetics in partnership with CAMP Cosmetics called "Collection Lepore", as well as a signature perfume. Amanda Lepore was born in Cedar Grove, New Jersey. There is disagreement regarding her date of birth. Guesses for her age range from the 30 to around 50. The hospital that she was born in burnt down, along with the records of her birth.