How much is Alexis Bledel Worth?

Alexis Bledel net worth and salary: Alexis Bledel is an American actress, model, and producer who has a net worth of $9 million dollars. Alexis Bledel was born in Houston, Texas in September 1981. She is best known for playing Rory Gilmore in Gilmore Girls. As a child she participated in community theater to overcome her shyness. She started doing fashion modeling and attended New York University's Tisch School for the Arts for a year. Her TV debut came in The WB's Gilmore Girls from 2000 to 2007. In 2002 her movie debut came in Tuck Everlasting. She starred in the 2005 film The Sisterhood of the Traveling pants. Bledel has also starred in the films Sin City, Post Grad, and The Sisterhood of the Traveling pants 2. She has been featured on the cover of magazines such as People, Teen People, Teen Vogue, Teen, Seventeen, TV Guide, Vanity Fair, and Entertainment Weekly. She has appeared in an episode of ER as well as three episodes of Mad Men in 2012. Her unreleased projects include Jenny's Wedding and Outliving Emily. For her work on Gilmore Girls Alexis has won a Young Artist Award, Family Television Award, and two Teen Choice Awards. In 2014, she married her Mad Men co-star Vincent Kartheiser. She formerly dated Gilmore Girls and This is Us star Milo Ventimiglia. In 2017, Alexis began appearing on the Hulu series The Handmaid's Tale. 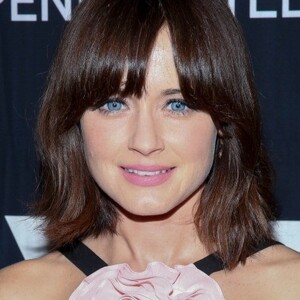