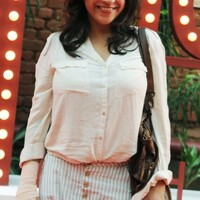 Zoya Akhtar Net Worth: Zoya Akhtar is an Indian film director who has a net worth of $10 million. Zoya Akhtar was born in Mumbai, Maharashtra, India in October 1972. Her parents are screenwriters Javed Akhtar and Honey Irani. Zoya earned her Bachelors of Arts at St. Xavier's College and studied at the New York University Film School. She started off as an actress starring in the 1996 movie Kama Sutra: A Tale of Love. Akhtar was the executive producer for the 2004 film Lakshya. She also executive produced the 2007 film Honeymoon Travels Pvt. Ltd. She wrote the 2008 short Migration. In 2009 Akhtar wrote, directed, and executive produced the movie Luck by Chance. She wrote and directed the 2011 film Zindagi Na Milegi Dobara. Zoya wrote the 2012 film Talaash and directed the 2013 movie Bombay Talkies. In 2012 she won Best Directed, Best Story, and Best Screenplay for Zindagi Na Milegi Dobara at the Awards for the International Indian Film Academy. For the same film she also won Best Director and Best Film at the 2012 Filmfare Awards.