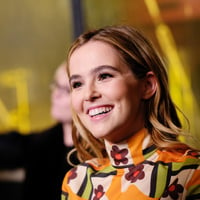 Zoey Deutch net worth: Zoey Deutch is an American actress and producer who has a net worth of $4 million. Zoey Deutch was born in Los Angeles, California in November 1994. Her mother is actress Lea Thompson and her father is director Howard Deutch. From 2010 to 2011 she starred as Maya Bennett on the television series The Suite Life on Deck. Deutch starred as Juliet Martin on the TV series Ringer from 2011 to 2012. In 2019 she starred on the series The Politician. She has appeared in several films including Mayor Cupcake, Beautiful Creatures, Vampire Academy, Dirty Grandpa, Everybody Wants Some!!, Vincent N Roxxy, Good Kids, Why Him?, Before I Fall, Rebel in the Rye, The Disaster Artist, Flower, The Year Of Spectacular Men, Set It Up, The Professor, and more. Zoey Deutch has also appeared in episodes of the TV series NCIS, Criminal Minds: Suspect Behavior, and more. She produced the movie The Year of Spectacular Men and was in the music video "Perfect" by Ed Sheeran.