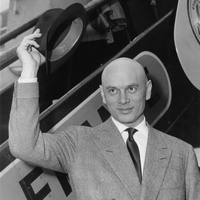 Yul Brynner Net Worth: Yul Brynner was a Russian actor who had a net worth of $10 million. Yul Brynner was born in Vladivostok, Far Eastern Republic in July 1920 and passed away in October 1985. Brynner was best known for playing the role on King of Siam on the musical The King and I. For his role in the Rodgers and Hammerstein musical he won two Tony Awards as well as an Academy Award for the film version. Brynner played the role over 4,600 times on stage. He and his mother moved to the United States in 1940. Brynner's television debut came in 1944 on the series Mr. Jones and His Neighbors. He made his film debut in the 1949 movie Port of New York. He won National Board of Review Awards for best Actor in 1956 for The King and I, Anastaia, and The Ten Commandments. He was nominated for a Laurel Award for Top Action Performance for his role in the 1960 film The Magnificent Seven. He served for the U.S. Office of War Information and was an active photographer. Brynner also authored two books and was a television director. He was awarded a star on the Hollywood Walk of Fame in 1960 at 6162 Hollywood Blvd. Yul Brynner passed away on October 10, 1985 of lung cancer at 65 years old.