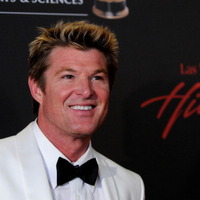 Winsor Harmon net worth: Winsor Harmon is an American actor who has a net worth of $8 million. Winsor Harmon was born in Crowley, Louisiana in November 1963. He is best known for starring as Thorne Forrester on the soap opera The Bold and the Beautiful. Harmon began starring as Forrester in 1996 when he took over for actor Jeff Trachta. Winsor Harmon starred as Del Henry on the soap opera All My Children from 1994 to 1995. She starred in and executive produced the movie Cathedral Canyon in 2013. Harmon has also appeared in episodes of the TV series Baywatch Nights, Acapulco H.E.A.T., and Meiden van de Wit. In 2005 he was nominated for a Soap Opera Digest Award for Outstanding Supporting Actor for The Bold and the Beautiful. Before he began acting he was a model for Ford Models. Harmon played at Texas A&M University on a football scholarship.