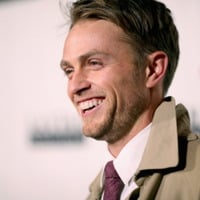 Wilson Bethel Net Worth: Wilson Bethel is an American actor who has a net worth of $4 million dollars. Born February 24, 1984 in Hillsborough, New Hampshire, Wilson Bethel was the third child born into a large family of artists and entertainers and began acting when he was sent to a special elementary school for the arts where the students performed Shakespeare plays. After graduating high school, he decided to pursue acting professionally and moved to Los Angeles, California where he landed guest spots on the prime-time series The O.C., JAG, Cold Case and NCIS. In 2008, his career got a boost when he was cast as Corporal Evan "Q-Tip" Stafford on the HBO mini-series Generation Kill. The gritty military drama followed the story of Recon Marines fighting in the Iraq War. During the filming, Bethel got to travel all over Africa and even trained at a boot camp. His most notable role, however, came in 2009 when he joined the cast of The Young and the Restless to play Ryder Callahan, a character that has appeared in over 70 episodes. On the big screen, he is credited for The Perfect Student, Tunnel Rats and Stealing Summers. At present, Wilson Bethel appears as one of the main cast members of Hart of Dixie.