What is William H. Macy's Net Worth and Salary?

William H. Macy is an American actor, writer, and director who has a net worth of $45 million. That is a combined net worth with his wife Felicity Huffman. Macy is perhaps most beloved for his role as Jerry Lundegaard in the 1996 film "Fargo," which earned him an Academy Award nomination. William has more than 130 acting credits to his name, including "Boogie Nights" (1997), "Wag the Dog" (1997), "Mystery Men" (1999), "Magnolia" (1999), and "The Lincoln Lawyer" (2011). Macy appeared as Dr. David Morgenstern on 31 episodes of the NBC medical drama "ER" from 1994 to 2009, and in 2011, he began playing Frank Gallagher on the Showtime series "Shameless," a role that has earned him five Primetime Emmy nominations.

William H. Macy was born William Hall Macy Jr. on March 13, 1950, in Miami, Florida. His father, William, was a World War II veteran who received an Air Medal and the Distinguished Flying Cross, and his mother, Lois, married William Sr. after her first husband died in the war. Macy was raised in Georgia, where his father ran an Atlanta construction company, then Maryland, where William Sr. ran an insurance agency. Macy attended Allegany High School in Cumberland, graduating in 1968, then enrolled at West Virginia's Bethany College to study veterinary medicine. He transferred to Vermont's Goddard College, where he learned from playwright David Mamet; the two would later become co-founders of Chicago's St. Nicholas Theater and New York's Atlantic Theater Company. William is also an alumnus of New York City's HB Studio.

After he graduated from college in 1972, Macy appeared in several David Mamet plays, originating roles in "American Buffalo" and "The Water Engine." William lived in Chicago and Los Angeles, then in 1980, he relocated to New York City, where he performed in more than fifty Broadway and Off-Broadway productions. He made his television debut in the 1987 miniseries "The Awakening Land" and his film debut in 1980's "Somewhere in Time." Throughout the 1980s, Macy guest-starred on "Spenser: For Hire" (1985–1988), "Kate & Allie" (1986), and "The Equalizer" (1987) and appeared in the films "The Last Dragon" (1985) and "Radio Days" (1987). He appeared in the "Law & Order" pilot (though it actually aired as the sixth episode of the series) in 1990 and returned as a different character in 1992. 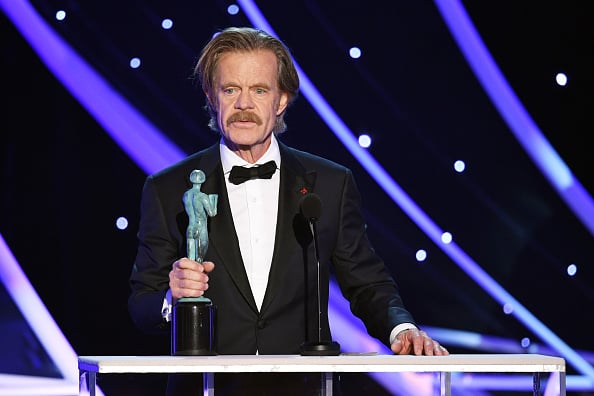 On March 12, 2019, Macy's wife, Felicity Huffman, was arrested by FBI agents in connection to a widespread college bribery scandal. Felicity allegedly paid $15,000 to have someone change her daughter's incorrect answers on the SAT. When Huffman was arrested, the FBI agreed to release her on bond after Felicity was able to show that she and William own at least $20 million worth of real estate and have $4 million worth of liquid assets. Macy was not charged with any crimes, but Huffman served 11 days in a federal prison in October 2019 after pleading guilty to conspiracy to commit mail fraud and honest services mail fraud. Her sentence also included a year of probation and 250 hours of community service, and she was ordered to pay a $30,000 fine.

William married actress Felicity Huffman on September 6, 1997, after 15 years of on-and-off dating. They have two daughters, Sophia (born December 1, 2000) and Georgia (March 14, 2002). After filming "Door to Door," Macy was inspired to get involved with the United Cerebral Palsy Association, and the organization named him a national ambassador in 2003. William enjoys playing the ukulele, riding motorcycles, and woodturning, and he was featured on the cover of "Fine Woodworking" magazine's" Wood Turning Basics" issue in 2007.

In 1997, Macy received an Academy Award nomination for Best Actor in a Supporting Role for "Fargo," and the film earned him awards from the 20/20 Awards, Awards Circuit Community Awards, and Film Independent Spirit Awards. He has been nominated for 14 Primetime Emmys, winning Outstanding Lead Actor in a Miniseries or a Movie and Outstanding Writing for a Miniseries, Movie or a Dramatic Special for "Door to Door" in 2003. William has earned five Golden Globe nominations, three American Comedy Award nominations, and 13 Online Film & Television Association nominations, and he was inducted into the OFTA TV Hall of Fame in 2018. He has won four Screen Actors Guild Awards: Outstanding Performance by a Male Actor in a Television Movie or Miniseries for "Door to Door" in 2003 and Outstanding Performance by a Male Actor in a Comedy Series for "Shameless" in 2015, 2017, and 2018.

In 2012, Macy and Huffman paid $3.8 million for a 5-bedroom Hollywood Hills home that is next door to their main home. In early 2020, they put the 4,566 square foot house on the rental market for $16,500 per month. The couple also purchased Felicity's childhood home in Snowmass, Colorado, but after an inspection revealed that the house was in such bad shape that it needed to be torn down, they built a "Hollywood version of the old house" in its place. 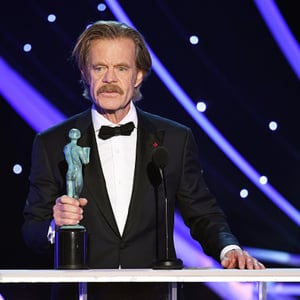