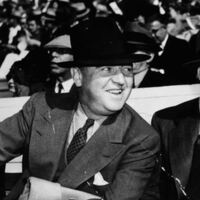 William Frawley net worth: William Frawley was an American entertainer and actor who had a net worth equal to $10 million at the time of his death in 1966 (after adjusting for inflation). That's roughly $1.4 million in 1966 dollars. William Frawley was born in Burlington, Iowa in February 1887 and passed away in March 1966. He was best known for starring as Fred Mertz in the television series I Love Lucy. Frawley starred as Fred from 1951 to 1957 and reprised the role in the TV series The Lucy-Desi Comedy hour from 1957 to 1960. He also starred as Michael Francis "Bub" O'Casey in the series My Three Sons from 1960 to 1965. Frawley starred in many films including The Lemon Drop Kid, Three Cheers for Love, Double or Nothing, St. Louis Blues, The Adventures of Huckleberry Finn, The Farmer's Daughter, Ziegfeld Follies, Miracle on 34th Street, The Babe Ruth Story, and Abbott and Costello Meet the Invisible Man. He also starred on Broadway and released the album Bill Frawley Sings the Old Ones in 1958. Frawley was nominated for five Primetime Emmy Awards for I Love Lucy. He was awarded a star on the Hollywood Walk of Fame in 1980 at 6322 Hollywood Blvd. William Frawley passed away on March 3, 1966 at the age of 79.