William B. Davis Net Worth

in Richest Celebrities › Actors
William B. Davis Net Worth:
$2 Million

William B. Davis Net Worth: William B. Davis is a Canadian actor and director who has a net worth of $2 million dollars. Born January 13, 1938 in Toronto, Ontario, Canada, and known for his iconic role as The Cigarette Smoking Man in The X-Files (better known as Cancerman), he is also highly regarded as a director in theatre as well.

On the small screen, some of his credits include guest appearances on hit shows such as Human Target, Caprica and Supernatural. He was the artistic director of the English Acting Program at Canada's National Theatre School and later founded Vancouver's The William Davis Centre for Actor's Study. Davis has also appeared in a string of films opposite stars such as Penelope Ann Miller, Martin Sheen, Anne Archer, Margot Kidder, Matthew Perry, and Brian Dennehy. He joined Britain's National Theatre in 1964, working with greats Maggie Smith and Laurence Olivier then returning to Montreal the following year to become Assistant Artistic Director and, subsequently, Artistic Director of the National Theatre School of Canada. Davis spent a formative year at The London Academy of Dramatic Art in Britain. An avid water skier and competitive snow skier, Davis attends fan conventions around the world and gives talks on climate change and skepticism. In September 2011, he married Emmanuelle Herpin and divides his time between Canada and France. 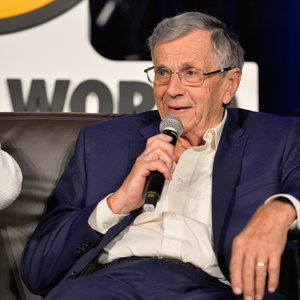