Wilford Brimley net worth and salary: Wilford Brimley was an American actor and television pitchman who had a net worth of $8 million at the time of his death. He was best-known for appearing in films like "The Firm", "Cocoon" and "The Natural". He was also famous for being a product pitchman for Quaker Oats and Liberty Medical diabetes testing supplies. Wilford died on August 1, 2020 at the age of 85.

Allen Wilford Brimley was born on September 27, 1934 in Salt Lake City, Utah. In 1939, the family sold their Utah farm and relocated to Santa Monica, California. When Wilford – who at the time went by "Tony", was 14, he dropped out of school to become a ranch hand in Idaho. He then enlisted in the Marines. When his service was complete he returned to working as a ranch hand, wrangler, blacksmith, and even briefly as a bodyguard for Howard Hughes.

His first exposure to show business was shoeing horses for stables that furnished animals for movie and TV Westerns. When he returned to Los Angeles after living in Idaho for a few years, he began working as a riding extra for Westerns during the mid-1960s and formed a lasting friendship with the up-and-coming actor Robert Duvall who urged the cowboy to pursue acting as a career. He eventually landed non-speaking extra and stunt work. Non-speaking roles eventually budded into a respectable steady TV and film career. That career grew slowly but surely.

Robert Redford employed him on several occasions, first as a farmer in "The Electric Horseman" (1979) and later in "Brubaker" (1980), before giving Brimley one of his best roles as the crusty manager of a struggling baseball farm team in Barry Levinson's "The Natural" (1984).

A stout, often bespectacled, character actor of film and TV with a walrus mustache and a flair for accents, he proved himself adept at playing endearing curmudgeons, giving perhaps his most memorable performance as one of the increasingly frisky senior citizens in Ron Howard's "Cocoon" (1985) and its sequel "Cocoon: The Return" (1988). Wilford appeared on TV in movies like CBS's "Blood River" (1991) and TNT's "The Good Old Boys" (1995).

Wilford  arguably gained his most fame and fortune as a brand spokesman. His ongoing role as Quaker Oats' spokesman has kept him solidly in the public eye for decades. He was diagnosed with diabetes in 1979, and he began working to raise awareness of the disease. The American Diabetes Association honored him in 2008 with an award to recognize his lifetime of service.

Wilford was also a musician. He released several albums of jazz standards. He was described as having a very appealing singing voice and decent skills on the guitar. 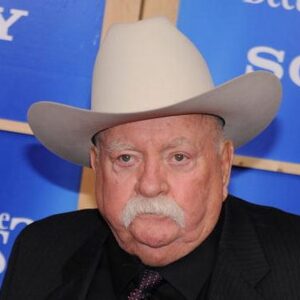