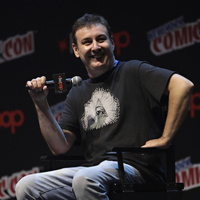 Walt Flanagan Net Worth: Walt Flanagan is an American reality television personality, comic book store manager, comic book artist, podcaster, and songwriter who has a net worth of $600 thousand dollars. Walt Flanagan was born in Perth Amboy, New Jersey in October 1967. He is a long-time friend of actor Kevin Smith and turned Kevin on to comic books. Flanagan manages Jay and Silent Bob's Secret Stash comic book store in Red Bank, NJ. He co-hosts the Tell 'Em Steve-Dave! Podcasts with Bryan Johnson and Brian Quinn. Flanagan is also featured in the AMC reality TV series Comic Book Men. Walt has appeared in the films Clerks., Mallrats, Chasing Amy, Dogma, Vulgar, Jay and Silent Bob Strike Back, and Clerks II. Since 2012 he has been a featured cast member on the TV series Comic Book Men. Flanagan has been cited as the influence for the character Brodie in Mallrats and originated the character Olaf in Clerks. He is the artist for the original comic series Cryptozoic Man. Walt is married to Debra Flanagan and has two daughters. His family's home sustained catastrophic damage from Hurricane Sandy.