Price had almost 200 acting credits to his name. He starred in many movies including The Private Lives of Elizabeth and Essex, Tower of London, The Invisible Man Returns, The House of the Seven Gables, Brigham Young, Wilson, Up in Central Park, Abbot and Costello Meet Frankenstein, The Three Musketeers, The Bribe, The Baron of Arizona, House of Wax, Dangerous Mission, Son of Sinbad, The Ten Commandments, The Story of Mankind, House on Haunted Hill, Master of the World, Nefertiti, Queen of the Nile, Tower of London, Beach Party, The Last Man on Earth, and Edward Scissorhands. He authored I Like What I Know – A Visual Autobiography in 1959. He was awarded a Life Career Award from the Academy of Science Fiction, Fantasy & Horror Films in 1986. Price has stars on the Hollywood walk of Fame for Motion Picture and Television. Vincent Price passed away on October 25, 1993 from lung cancer at 82 years old. 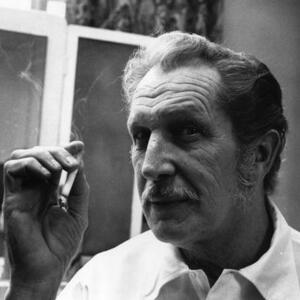