Vic Sotto Net Worth: Vic Sotto is a Filipino actor, television show host, comedian, and film producer who has a net worth of $14 million. Vic Sotto, better known as Bossing was born Marvic "Vic" Castelo Sotto on April 28, 1954 in Manila, Philippines to his parents Marcelino Ojeda Sotto and Dr. Herminia Castelo. His grandfather Vicente Sotto has Chinese ancestry. He is the brother of Marcelino Antonio "Maru" Sotto, Jr., Vicente "Tito" Sotto, and Valmar "Val" Sotto. Sotto studied at Colegio de San Juan de Letran. He started his career as a folk singer and guitarist. He then joined his brothers Tito and Val in a gag show "OK Lang" under IBC TV Network. During these years, Sotto was also the lead vocalist of the disco funk band VST & Company. He produced such songs as "Awitin Mo at Isasayaw Ko", "Rock, Baby, Rock", and "Kung Sakali". He won three consecutive titles for Philippine Box Office King (2004, 2005, and 2006). He is known for 2010's "Si Agimat at si Enteng Kabisote", "Enteng ng Ina mo" in 2011 and" My Little Bossings" in 2013. He has been married twice and has four children between his two ex-wives and a girlfriend. 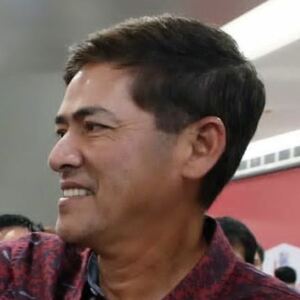