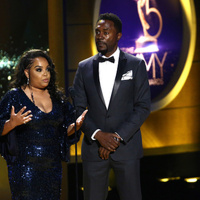 Vanessa Baden Net Worth: Vanessa Baden is an American actress who has a net worth of $300 thousand. Vanessa Baden was born in Manhattan Beach, California in September 1985. She was raised in Satellite Beach, Florida and started working as a print model. In 2004 Vanessa won the Florida District Miss Black and Gold Pageant. Baden graduated from Florida State University in 2007. Her first role came in the TV series My Brother and Me in 1994. She starred as Vanessa in the series Gullah, Gullah Island from 1994 to 1996. In 1997 Baden made her film debut starring as Lee Ruth in the movie Rosewood. One of her best known roles came starring as Kyra Rockmore in the television series Kenan & Kel from 1996 to 2000. She reprised the role in the 2000 TV movie Two Heads are Better Than None. Baden was not heard from for over 10 years but she came back to star in, executive produce, direct, and write the TV series Fail from 2011 to 2012. In 2012 she appeared in the short Franchise and she starred as Erin Mult in the 2013 TV movie Chris & Todd. Baden starred as Tracey in the 2014 film The Magic City.