What is Ursula Andress's Net Worth?

Ursula Andress is a Swiss actress and former model who has a net worth of $25 million. Ursula Andress became famous in 1962 for playing Bond girl Honey Ryder in the first James Bond movie, "Dr. No." She went on to appear in a range of films afterward, including "Fun in Acapulco," "She," "The Blue Max," "Casino Royale," "Slave of the Cannibal God," and "Clash of the Titans." In her personal life, Andress was romantically involved with numerous famous men such as Jean-Paul Belmondo, Ryan O'Neal, and Harry Hamlin.

Ursula Andress was born on March 19, 1936 in Ostermundigen, Switzerland as the third of six children of Anna and diplomat Rolf. Her siblings are Heinz, Erika, Charlotte, Gisela, and Kàtey. When Andress was growing up, her father was expelled from the country for political reasons; she was subsequently raised by her grandfather. She attended school in Bern through the age of 16, and then studied art in Paris, France. Following that, Andress went to Rome, Italy, where she became a nanny.

Andress began her career in Italian films in the mid-50s. After meeting a producer at a party, she landed walk-on roles in "An American in Rome," "The Sins of Casanova," and "La Catena Dell'odio."

Coming to Hollywood in late 1955, Andress signed a seven-year deal with Paramount Pictures. However, the deal brought her no acting roles, as she was hesitant to learn English. Eventually, Andress bought herself out of the contract. She then signed with Columbia Pictures, but also failed to make any films for the studio.

Hollywood Breakthrough in Dr. No

In 1962, Andress rose to international stardom when she played Bond girl Honey Ryder in the inaugural Bond film, "Dr. No." Due to her heavy accent, she was dubbed by actress Nikki van der Zyl. Despite her voice never being heard, Andress became instantly iconic for her performance; especially famous was the moment in which she rose out of the Caribbean wearing a skimpy white bikini with a large knife at her side. 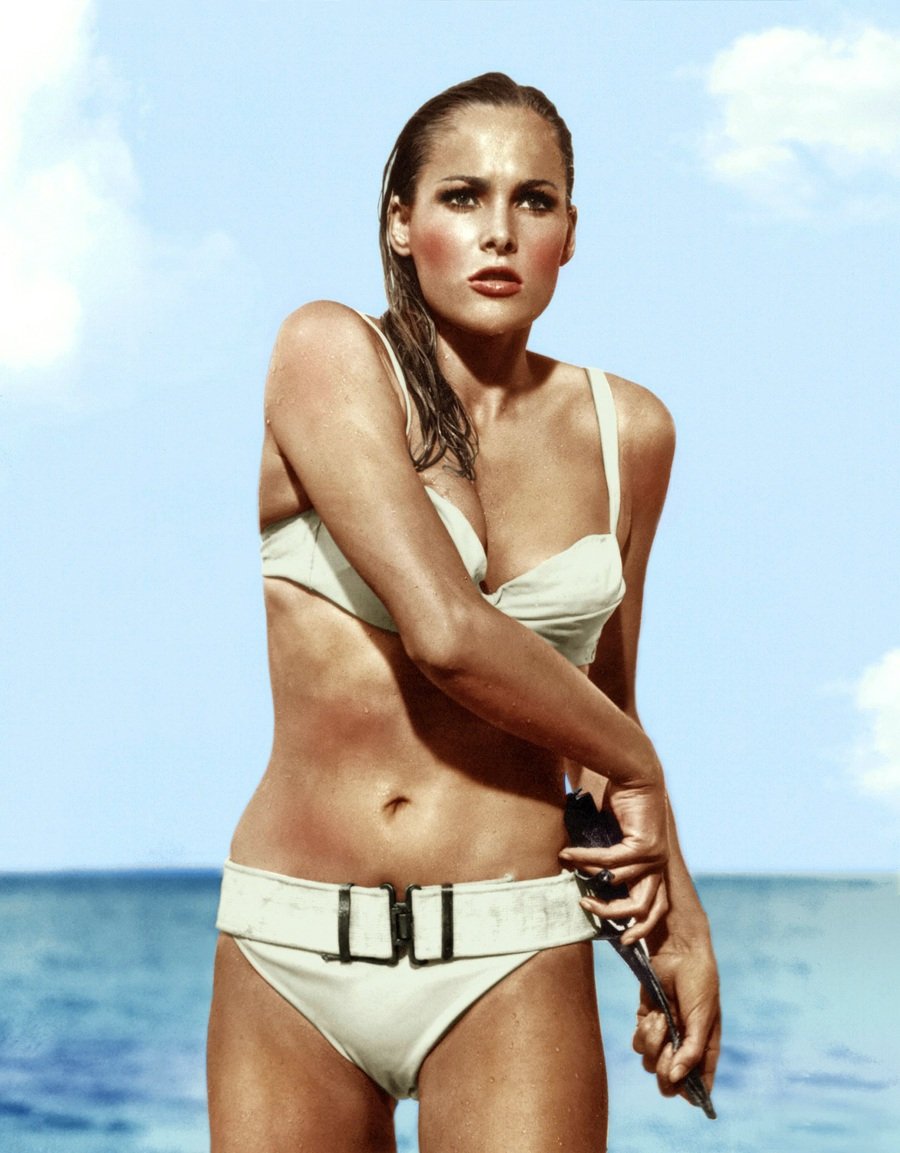 Following her ascendancy to fame with "Dr. No," Andress played the female lead in the 1963 Elvis Presley musical "Fun in Acapulco." The same year, she starred alongside Frank Sinatra, Dean Martin, and Anita Ekberg in the Western comedy "4 for Texas." Andress had her most prolific year on screen yet in 1965, appearing in five films: the drama "Nightmare in the Sun," the adventure film "She," the comedies "What's New Pussycat?" and "Up to His Ears," and the Italian-French satire "The 10th Victim." Returning to Hollywood, Andress played the love interest of George Peppard's character in the war film "The Blue Max." She next starred in the drama "Once Before I Die," and played spy Vesper Lynd in the James Bond parody "Casino Royale." Andress closed out the 60s with the Italian comedy "Anyone Can Play" and the adventure comedy "The Southern Star."

In the early 70s, Andress starred in the British heist film "Perfect Friday" and the international Spaghetti Western "Red Sun." She subsequently starred in a string of Italian films, including "Stateline Motel," "Loaded Guns," "Africa Express," "The Sensuous Nurse," "The Loves and Times of Scaramouche," "Sex with a Smile II," and "Double Murder." Andress also starred opposite Stacy Keach in the cult horror classic "Slave of the Cannibal God." She concluded the decade with the comedy "Tigers in Lipstick" and the swashbuckler "The Fifth Musketeer." Andress's next role was as Greek goddess Aphrodite in the 1981 fantasy adventure film "Clash of the Titans." Her work on film after that was more sporadic, with fewer appearances over the years. Notable credits since then have included "Red Bells," the third and fourth films from the "Fantaghirò" series, and the fifth film from the "Cremaster" cycle. 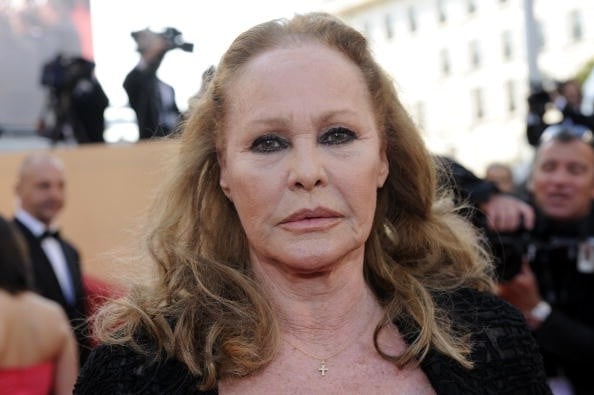 The same year as "Dr. No," Andress made her television debut in an episode of the anthology series "Thriller." She didn't return to the small screen until more than two decades later, when she appeared in a 1983 episode of the action-adventure series "Manimal." Following that, Andress was in episodes of "The Love Boat" and the miniseries "Peter the Great." In 1988, she had a three-episode arc on the primetime soap opera "Falcon Crest."

Andress has had a prolific number of romantic relationships with famous men. She claims she lost her virginity to married French actor Daniel Gelin when she was 17. After moving to America, Andress dated actors James Dean and Dennis Hopper; she then began an affair with married actor and director John Derek, who left his wife and family to marry the 19-year-old Andress in 1957. The couple split in 1964 due to Andress's affair with actor Ron Ely, before officially divorcing in 1966. While the couple was separated, Andress dated actors John Richardson and Marcello Mastroianni, both of whom she had appeared alongside in movies. Next, from 1965 to 1972, Andress lived with another of her costars, Jean-Paul Belmondo. From 1973 to 1977, she lived with her costar Fabio Testi.

In 1979, Andress began dating her "Clash of the Titans" costar Harry Hamlin, with whom she had a son named Dimitri. The pair eventually separated in 1983. Andress's next longterm relationship was with Fausto Fagone, who was 30 years her junior. They split in 1991. Among her other famous inamoratos over the years, Andress dated Ryan O'Neal, John Delorean, Franco Nero, Helmut Berger, Gerardo Amato, and Julio Iglesias. 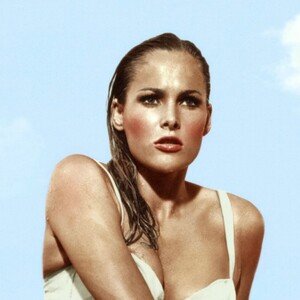