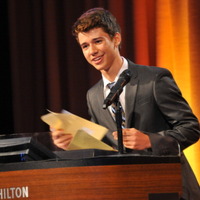 Uriah Shelton Net Worth: Uriah Shelton is an American actor and singer who has a net worth of $2 million. Uriah Shelton was born in Dallas, Texas in March 1997. Shelton started off as a model and then he moved with his mother to Los Angeles, California. He started appearing in commercials and then became the 2006 ATA Tae Kwon Do California State Champion. He made his television debut in 2007 appearing in the TV series Without a Trace and Ghost Whisperer. Shelton made his feature film debut in the movie Lower Learning in 2008. He had a recurring role as Jack McGuire on the TV series Trust Me in 2009. Uriah's best known roles have come starring as Jeff Cargill on the series The Glades from 2010 to 2013 and starring as Josh on the internet series Blue since 2012. Shelton has also appeared in episodes of the TV series MADtv, The Suite Life on Deck, Trauma, Little Monk, Monk, R.L. Stine's The Haunting Hour, Franklin & Bash, Last Man Standing, Justified, and Girl Meets World. He was nominated for a Young Artist Award for Best Performance in a TV Movie, Miniseries or Special – Supporting Young Actor for The Nanny Express in 2009.