Having grown up in West Texas, he was first introduced to racetracks but eventually wound up falling in love with rodeo. In 1980, he won the New Mexico High School Rodeo Bull Riding and All Around title. The following year he won the award for Team Roping and All Around title. After graduating from high school, Tuff attended the Sul Ross State University where he became a member of the rodeo team. He participated in bull riding, team roping and steer wrestling.

His professional career began in 1983 when he filled out a permit for the PRCA. He quickly became famous as a bull rider who rode on bulls that had never been ridden before. He also had an all-or-nothing style of riding that left his fans dazed. He is also particularly known for being a close friend to Lane Frost, whom, along with others, he often traveled with to cut down on costs.

Tuff went on to win three PRCA titles and was later included in the Pro Rodeo Hall of Fame. In 1993, he won the National Finals Rodeo, managing to ride the Charbray Bull with a 95 point ride. He sustained a neck injury the same year that kept him out of most competitions being held. Tuff is currently retired and living a simple life with his wife and two sons. 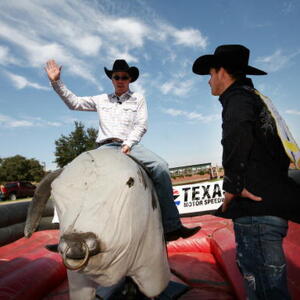