What is Tony Shalhoub' Net Worth and Salary?

Tony Shalhoub is an American actor who has a net worth of $20 million. He is best-known as the star of the critically acclaimed USA Network television show "Monk," which ran from 2002 to 2009 and produced 125 episodes over its 8 seasons. He is also known for his role in the award-winning Amazon television series "The Marvelous Mrs. Maisel," and he has been in a number of films including "Galaxy Quest," "Cars," "Spy Kids," "The Man Who Wasn't There," and "1408."

Tony Shalhoub was born Anthony Marc Shalhoub on October 9th, 1953 in Green Bay Wisconsin. His father was Lebanese and emigrated to the US when he was a child. He worked as a meat peddler. His mother was a second-generation Lebanese-American. One of his grandparents was killed in the Hamidian massacres, which were mass killings perpetrated by the Ottoman Empire against the Armenians. Shalhoub was the second youngest of his nine siblings, and he attended Green Bay East High School. He showed an interest in acting when he was a teenager and starred in the school's production of "The King and I." After graduating, he briefly attended the University of Wisconsin-Green Bay, but he participated in the National Student Exchange and ended up at the University of Southern Maine located in Portland. While attending college there, Shalhoub was active in the school's theater department. After graduating with his bachelor's degree in drama, he went on to earn his master's degree in fine arts at the Yale School of Drama.

After receiving his master's degree, Shalhoub moved to Cambridge, Massachusetts. He spent four seasons working with the American Repertory Theater, and then he moved to New York City. He worked waiting tables for a period, and then in 1985, he received his first break with a role in the production "The Odd Couple." He made his first appearance on television the next year with a small part in an episode of the show "The Equalizer." In the late eighties, he continued to make minor appearances in films and have guest star roles on television shows. His big break in film came in 1991 with the critically acclaimed Coen brothers directed movie "Barton Fink," and he had a minor role in the 1992 romantic comedy "Honeymoon in Vegas" as well as in the 1993 fantasy comedy "Adam Family Values." His big break in television came with the award-winning comedy series "Wings," which he joined the cast of in 1991. He played the role of mild-mannered, hopeless romantic taxi service owner, Antonio Scarpacci. While working to become established as a film and television actor, he continued to perform on stage, and in 1992, he was nominated for a Tony Award for his performance in the Broadway play "Conversations with My Father." He made guest star appearances on the television shows "The X-files," "Frasier," "Gargoyles," and "Almost Perfect" throughout the decade. He finished out the nineties with a leading role in the science fiction comedy film "Galaxy Quest," and a starring role in the television series "Stark Raving Mad." The show only lasted one season but won a People's Choice Award for Favorite Television New Comedy Series. 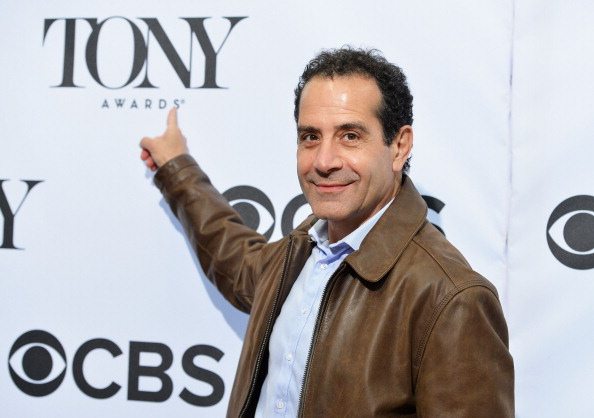 Shalhoub's career built slowly through the nineties but picked up speed in the new millennium. In 2001, he had a supporting role in the "Spy Kids" film and the science fiction mystery film "Imposter," a minor role in the Oscar-nominated crime drama "The Man Who Wasn't There," and he starred in the horror film "Thirteen Ghosts." In 2002, he saw the releases of the sequel "Spy Kids 2: The Island of Lost Dreams," the science fiction film "Men in Black II," and the romantic comedy "Life or Something Like It." He appeared in the third installment of the "Spy Kids" franchise in 2003, and he had a supporting role in the biographical romance "Against the Ropes" as well as in the comedy drama "The Last Shot" in 2004. The role for which he would become best known for came in 2002 with the USA Network comedic police procedural drama television series "Monk." Shalhoub was cast as the title character, a highly skilled consultant detective who suffers from Obsessive Compulsive Disorder. The series enjoyed high ratings and viewership throughout its eight-season run. It received eight Emmy Awards. Shalhoub himself received three Emmy Awards, one Golden Globe, and two Screen Actors Guild Awards for his performance. The show held the record for the most-watched scripted drama episode from 2009 to 2012 until it was surpassed by an episode of "The Walking Dead."

Shalhoub continued to appear in films during his time on "Monk." In 2007, he had a supporting role in the horror film starring John Cusack "1408," based on the Stephen King novel. He voiced the character of Luigi in the animated film franchise "Cars." In 2014, he appeared in the superhero film remake "Teenage Mutant Ninja Turtles," and he reprised his role for the 2016 sequel. In 2017, he joined the cast of the award-winning comedy television series "The Marvelous Mrs. Maisel." For his work on the show, he has received four Screen Actors Guild Awards as well as an Emmy Award and two Emmy nominations.

In 1992, Shalhoub married actress Brooke Adams, and they have worked together several times. She appeared in five episodes of "Monk," and they both appeared on Broadway in the 2010 revival of the production "Lend Me A Tenor." The couple had adopted a daughter prior to their wedding, and in 1994, they adopted a second daughter. Shalhoub's brother, Michael, appeared alongside his brother in several episodes of "Monk." In 2020, both Shalhoub and his wife tested positive for CoVid-19, but both recovered after a few weeks of illness.

For several decades Tony and Brooke have owned a six-acre property on Martha's Vineyard. They paid $750,000 for the property some time in the late 1990s.