Tony Goldwyn net worth and salary: Tony Goldwyn is an American actor and director who has a net worth of $8 million. He is perhaps best known for his role of Carl Bruner in "Ghost", and for his role of fictional United States president Fitzgerald Grant III in ABC's "Scandal", which he played from 2012-2018.

Early Life: Born in Los Angeles, California, on May 20, 1960, Tony Goldwyn grew up in a family of actors, writers, and directors. He is the son of actress Jennifer Howard and film producer Samuel Goldwyn Jr. His maternal grandparents were playwrights Sidney Howard and actress Clare Eames. As for his siblings, Goldwyn's brother John is a former executive producer of "Dexter." His brother Peter is also a film producer. Tony went on to graduate with a BFA in Theater from Brandeis University. He then went on to attend the London Academy of Music and Dramatic Art. He also studied acting at HB Studio in New York City.

Career: He began his professional on-camera career with a small role in 1986's "Friday the 13th Part VI: Jason Live." He next appeared in "Gaby" in 1987 and then went on to a slew of guest-starring roles on such popular late-eighties television shows as "St. Elsewhere", "Designing Women", "L.A. Law", "Hunter", and "Murphy Brown". In 1990, he was cast in the role that would make him a household name, as Carl Bruner, Patrick Swayze's character's friend-turned-betrayer in "Ghost". For this role, he earned a Saturn Award nomination for Best Supporting Actor. He is also well known for his role on the comedy series "Designing Women," in which he played a young, HIV-positive interior designer who asked the women of Sugarbakers to design his funeral. In 1993, Goldwyn played the role of Fletcher Coal in "The Pelican Brief." In the HBO miniseries "From the Earth to the Moon," Goldwyn played Neil Armstrong, commander of Apollo 11.

In 1995, Tony played the role of Harold Nixon in "Nixon." In 1999, he voiced the title character from the animated feature film "Tarzan." He reprised the role in the Disney video games "Tarzan Untamed" and "Kingdom Hearts." Goldwyn had a recurring role on NBC's "Law & Order: Criminal Intent" as Frank Goren, the brother of lead character Robert Goren. From 2012-2018, Goldwyn starred as President Fitzgerald Grant III in the ABC legal and political drama "Scandal." He also directed eight episodes of the show. In 2013, Goldwyn starred in the Lifetime Original Movie "Outlaw Prophet" as Warren Jeffers.

In 2014, Tony appeared in Divergent as Andrew Prior, the father of Angel Elgort and Shailene Woodley's characters. In 2015, he starred in James Gunn's horror film "The Belko Experiment." Goldwyn appeared in the feature film "Mark Felt – The Man Who Brought Down the White House" in 2017 as part of an all-star cast including Liam Neeson and Diane Lane.  In 2018, Goldwyn played Ben Lefevre in the Netflix supernatural series "Chambers." Beginning in 2020, Goldwyn has had a recurring guest role in HBO's "Lovecraft Country," appearing as Samuel Braithwaite. He is slated to appear in the film King Richard" in 2021.

Goldwyn has gone back and forth between film and television work, both as an actor and a director. He has directed such projects as, "A Walk on the Moon", "The L Word", "Grey's Anatomy", and "Dexter," in which he also acted. In 2014, he directed the pilot episode of WE's "The Divide." He also served as an executive producer. In addition, Goldwyn has recorded numerous audiobooks throughout his career.

Outside of his lengthy film and TV career, Goldwyn is also a stage actor. He has appeared twice in Off-Broadway shows at Second Stage Theatre, appearing in "Spike Heels" in 1992 alongside Kevin Bacon, and starring opposite Kate Burton in "The Water's Edge." He also appeared in "Promises" starring Sean Hayes and Kristin Chenoweth on Broadway at the Circle in the Square theater. The cast recording was released on June 23, 2010, with Goldwyn featuring on three tracks.

In April 2012, Goldwyn played Captain von Trapp opposite Laura Osnes in a performance of "The Sound of Music" at Carnegie Hall. The performance also featured opera singer Stephanie Blythe, Brooke Shields, and Patrick Page. In 2018, starred opposite Bryan Cranston in the role of Max Schumacher in a sold-out run of "Network" at the Belasco Theatre on Broadway. In 2020, Goldwyn appeared on Broadway again as Henry Wilcox in "The Inheritance"

Activism: Goldwyn is a former president of the Creative Coalition and is involved heavily with arts advocacy and activism. Tony also works as a spokesperson of the AmeriCares Foundation. He was an avid supporter of Hillary Clinton in the 2016 presidential election and in 2016 he directed a commercial featuring his "Scandal" co-stars Kerry Washington, Viola Davis, Ellen Pompeo, and Shonda Rhimes in support of Clinton's presidential campaign. Goldwyn also serves as an ambassador for the non-profit The Innocence Project, an organization that strives to exonerate wrongfully convicted inmates and reform the criminal justice system.

Personal Life: Goldwyn has been married to production designer Jane Michelle Musky since 1987 and the pair has two daughters, Anna and Tess. They raised their family in suburban Connecticut where Tony and Jane still reside. 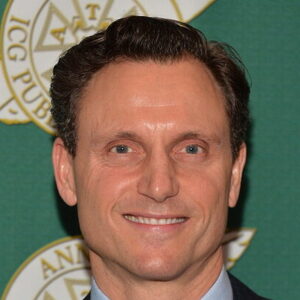