Tony Burton Net Worth: Tony Burton was an American actor who had a net worth of $1.5 million. Anthony Burton was born in Flint, Michigan in March 1937. Tony Burton was best known for playing Tony "Duke" Evers in the Rocky movie series. Tony was a two time all-state football player and a Michigan Golden Gloves heavyweight boxing champion.

He played halfback and also lead his baseball team to a city championship title as a pitcher. He served three and a half years in prison for robbery. He started acting in a psychodrama workshop in prison. He worked with small theater companies in the Los Angeles, California area. Burton is a member of The Actors Studio. He first appeared in The Black Godfather in 1974. From there he appeared in episodes of Kojak, The Invisible Man, Baretta, Good Times, The Six Million Dollar Man, Good Times, The Rockford Files, The Hardy Boys/Nancy Drew Mysteries, The Incredible Hulk, The Greatest American Hero, T.J. Hooker, The A-Team, Moonlighting, A Different World, Twin Peaks, Renegade, NYPD Blue, and Chicago Hope. He appeared in the first Rocky film in 1976 as Apollo's Trainer. He appeared in Rocky II, III, IV, and V as Apollo's Trainer/Duke. He reprised the role of Duke for the 2006 film Rocky Balboa. From 1987 to 1988 he starred as Big Arthur in the series Frank's Place. 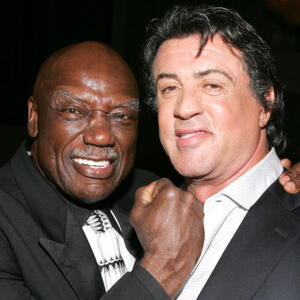