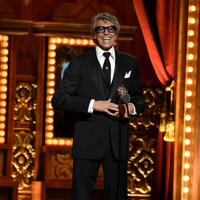 Tommy Tune net worth: Tommy Tune is an American actor, singer, dancer, director, producer, and choreographer who has a net worth of $20 million. Tommy Tune was born in Wichita Falls, Texas in February 1939. He made his debut on Broadway in Baker Street in 1965. Tune earned his first choreography and directing credits for The Best Little Whorehouse in Texas in 1978 and would go on to direct or choreograph eight musicals on Broadway. He has starred in Broadway productions of A Joyful Noise, How Now, Dow Jones, Seesaw, My One and Only, Tommy Tune Tonight!, and Bye Bye Birdie. Tune also starred in the movies Hello, Dolly! and The Boy Friend and appeared in episodes of the TV series Nanny and the Professor, Mister Rogers' Neighborhood, The City, and Arrested Development. Tune was awarded a star on the Hollywood Walk of Fame for Live Performance in 1993 at 1777 Vine Street. He has won many Tony Awards and Drama Desk Awards. Tune won a National Medal of Arts and in 2015 received a Special Tony Award.