Tom Wilkinson Net Worth: Tom Wilkinson is an English actor who has a net worth of $12 million. Tom Wilkinson was born in Leeds, West Riding of Yorkshire, England in February 1948. He graduated from the University of Kent and attended the Royal Academy of Dramatic Art. His screen debut came in the film Smuga cienia in 1975.

In 1979 he made his television debut on the series Crime and Punishment. He starred as Martin Taylor in the TV series Spyship in 1983 and starred in the 1986 mini-series First Among Equals. In 1996 Wilkinson starred as Seth Pecksniff in the TV mini-series Martin Chuzzlewit. He starred in another mini-series, The Kennedys, as Joe Kennedy Sr. in 2011 where his wife played Rose Kennedy. Wilkinson has starred in the movies Sense and Sensibility, The Ghost and the Darkness, The Full Monty, Oscar and Lucinda, Wilde, Shakespeare in Love, The Patriot, In the Bedroom, Eternal Sunshine of the Spotless Mind, Normal, The Exorcism of Emily Rose, Batman Begins, and Separate Lies, Michael Clayton, Cassandra's Dream, John Adams, Recount, Valkyrie, The Lone Ranger, and The Grand Budapest Hotel. Wilkinson has won a Golden Globe, Primetime Emmy, BAFTA Award, and two Screen Actors Guild Awards. He has also been nominated for two Academy Awards. He was appointed Officer of the Order of the British Empire in 2005 for services to Drama. Tom married actress Diana Hardcastle in 1998. 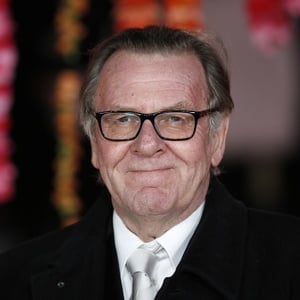