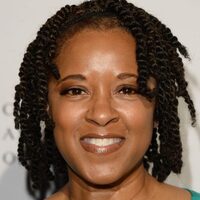 T'Keyah Crystal Keymáh net worth: T'Keyah Crystal Keymáh is an American actress, writer, and singer who has a net worth of $3 million. T'Keyah Crystal Keymáh was born in Chicago, Illinois in October 1962. In 1995 she starred as Scotti Decker on the television series On Our Own. Keymáh starred as Denis Everett on the TV series The Show in 1996. One of her best known roles came starring as Erica Lucas on the series Cosby from 1996 to 2000. Keymáh is also known for starring on the television series In Living Color from 1990 to 2001 and for starring on the TV series That's So Raven from 2003 to 2006. She has also appeared in movies including Jackie Brown and Chi-Raq and in episodes of the TV series Quantum Leap, The John Larroquette Show, Soul Train, My Wife and Kids, and more. Keymáh was nominated for Image Awards for Outstanding Supporting Actress in a Comedy Series for Cosby in 1998 and 1999.