Timothy Olyphant Net Worth: Timothy Olyphant is an American actor who has a net worth of $20 million. Although Timothy started his career as a stage actor in off-Broadway productions, he eventually became known for a wide range of film appearances, earning a reputation for playing villains. Some of his best-known roles were in the HBO series "Deadwood" and the FX series "Justified." Over the course of his career, Olyphant has won a number of awards and nominations.

Early Life: Timothy David Olyphant was born on May 20th of 1968 in Honolulu, Hawaii. At the age of two, Timothy moved to Modesto, California, where he was raised alongside two brothers. His father once acted as vice president of Gallo Winery, and Timothy is descended from the elite Vanderbilt family of New York.

While attending high school, Olyphant enjoyed drawing and other forms of art but steered clear of acting. He also became a competitive swimmer and was recruited by the University of Southern California after graduating from high school. Because of his busy schedule as a competitive swimmer, he was unable to study architecture as he had hoped. Instead, he aimed for a Bachelor of Fine Arts degree.

Timothy eventually graduated with his degree in 1990. Initially, he wasn't quite sure what he wanted to do next, and Olyphant tried to decide between earning his master's degree, acting as a swimming coach, and doing stand-up comedy in New York. Back in college, he had taken acting classes as an elective, and he enjoyed the experience. While in New York, he was drawn to a career in acting and started studying at the William Esper Studio. After completing a two-year program, Olyphant started auditioning for roles.

Career: Although Olyphant's first paid acting job was for a pilot, his true breakthrough came in 1995 with an off Broadway production of "The Monogamist." He won a Theatre World Award for Outstanding Debut Performance. Next year, he starred in another off Broadway production called "The SantaLand Diaries." Critics began to notice the young actor, and he made his film debut later that year with "The First Wives Club." His television debut also came that year with the series "Mr. & Mrs. Smith."

In 1997, Olyphant consolidated his blossoming television career with a guest appearance in three episodes of "High Incident." Minor roles followed in films such as "A Life Less Ordinary" and "Ellen Foster." To round out a promising 1997, Timothy made another breakthrough into the mainstream acting role with a central role in the film "Scream 2." He played a film student who later becomes one of the villains of the movie. Olyphant later described the role as "a gift," admitting that it helped advance his career considerably.

In 1998, he guest-starred in "Sex and the City" before booking a role in the HBO war movie "When Trumpets Fade." He then appeared in an independent film called "1999" before joining the cast of "Advice from a Caterpillar." He followed up with "No Vacancy," which also starred Christina Ricci. Further notoriety came in 1999 with the film "Go," in which Timothy played a drug dealer. The film later became a cult favorite.

In 2000, Olyphant played a central role in the film "The Broken Hearts Club" before booking an important part in the film "Gone in 60 Seconds." On the heels of this commercially successful film, he was offered the part of Dominic Toretto in "The Fast and the Furious," but he turned it down because he thought the entire idea was "stupid."

In 2001, he appeared in films such as "Rock Star," "Auggie Rose," and "Head Over Heels" before following up in 2002 with a role in the sci-fi series "Night Visions." That year, he starred in another independent film called "Coastlines." He then gained critical praise for his supporting role in the commercially successful Vin Diesel flick "A Man Apart." During this period, Olyphant also booked roles in films like "Dreamcatcher" and "The Safety of Objects."

One of his best-known roles came in 2004 when he was cast as Sheriff Seth Bullock in the series "Deadwood." The show ran for 3 seasons and won widespread critical acclaim. He followed up with a guest appearance in "My Name Is Earl" before starring in the romantic comedy "Catch and Release." Once again, critics heaped praise upon Olyphant for his performance.

In 2007, he starred in "Live Free or Die Hard" and "Hitman." While Timothy was previously very selective about the roles he accepted, he purchased a house in 2007 and took roles in these two films for "purely financial reasons." During this period, he also took roles in films like the Iraq War drama "Stop-Loss" and the comedy "Meet Bill." He also voiced a character in the video game "Turok" and made a guest appearance on the show "Samantha Who?"

Becoming more selective about his roles following 2009, Olyphant appeared in films like "A Perfect Getaway" and "High Life." He also booked a recurring role in the film "Damages." Following roles in the films "The Crazies" and "Elektra Luxx," Timothy booked another one of his better-known roles in "Justified." He played a Deputy U.S. Marshal and also executive produced the series. This became the defining role of his entire career, with many critics comparing him to a young Clint Eastwood. The series eventually won a Peabody Award in 2011.

While appearing in "Justified," Olyphant also found time to appear in series like "The Office," "The League," and "The Mindy Project." He also voiced a character in the animated series "Archer" and booked further voice acting roles in the video game "Call of Duty: Modern Warfare 3." Throughout this period, he appeared in films like "Raising Arizona" and "This Is Where I Leave You."

After appearing in the series "The Grinder," Olyphant returned to stage acting with an off-Broadway production of "Hold On to Me Darling." He then booked roles in films like "Mother's Day," "Snowden," and "Dark Was the Night." He also booked a starring role in the Netflix series "Santa Clarita Diet."

In 2019, a 2-hour film version of "Deadwood" premiered on HBO with Timothy Olyphant reprising his earlier role. In 2019, he booked a voice acting role in the animated film "Missing Link" and appeared in Quentin Tarantino's "Once Upon a Time in Hollywood."

Relationships: Timothy Olyphant's first and only marriage was to his college sweetheart Alexis Knief in 1991. The pair were married when Timothy was 23, and they have had three children over the course of their marriage. The family currently lives in Westwood, Los Angeles.

Other Interests: Timothy has a keen interest in sports, and at one point he acted as a sports reporter for Joe Escalante's morning radio show in Los Angeles. He also plays tennis at a semi-pro level and participates in many celebrity tournaments.

Real Estate: In 2003 Timothy paid $3.7 million for a home in Los Angeles, California. 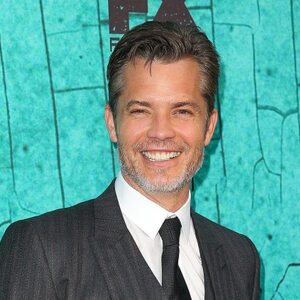