What is Tim Allen's Net Worth and Salary?

Tim Allen is an American actor who has a net worth of $100 million. As one of the best-known figures in contemporary comedy, Tim Allen has made a name (and a fortune) for himself with a range of film and television roles. Tim Allen is also an accomplished stand-up comedian. He is famous for his roles in shows like Home Improvement and Last Man Standing. During the peak seasons of Home Improvement Tim earned $1.25 million per episode. That still stands today as the fifth-highest salary ever paid to a TV actor.

Tim Allen's real name is Timothy Alan Dick, and he was born on June 13th of 1953 in Denver, Colorado. Timothy was raised alongside five other siblings. His father was a real estate agent, but he died from a car accident when Timothy was just 11 years old. His mother remarried two years later, and she brought her children with her to live with her new husband in Michigan. His mother's new husband already had three children, meaning the family now contained nine children.

When Allen attended high school, he quickly became involved in theater and drama. He also became an accomplished musician after learning how to play the piano. Although Tim Allen would later excel in the entertainment industry, he didn't pursue acting or comedy during his post-secondary education. He attended Central Michigan University and Western Michigan University, eventually graduating from the latter institution in 1976 with a Bachelor of Science degree in communications. Radio and television production was Allen's primary focus in university, and he became intimately involved with the college's student radio station.

Tim Allen's journey into comedy started in 1975 with a dare from his friends. They pushed him into performing stand-up during comedy night at a Detroit club, and he was a big hit with the crowd. He soon became so successful that he was appearing in cable comedy shows and television ads.

Just when things were going well for Tim Allen, he was arrested in 1978 and charged with a drug trafficking felony. Allen was caught at the Battle Creek International Airport with almost 1.5 pounds of cocaine. He later provided the names of other drug dealers in exchange for a reduced 3-year sentence. The alternative could have been life imprisonment, and Allen was eventually released after spending just over two years in prison.

Allen went straight back into comedy after his release and started to perform at the Comedy Store in Los Angeles. This led to various talk show appearances. Over the years, Tim Allen has continuously performed various stand-up routines throughout his career. He also embarks on stand-up comedy tours now and again.

Tim Allen's big break as an actor came in 1991 when he was cast in Home Improvement. Prior to this Allen wasn't known for his abilities as an actor, and he stated that he drew heavily from personal experiences to make his role in the show seem believable. Home Improvement was produced by Wind Dancer Productions, a company that he had co-founded.

In 1994, Tim Allen took the role of Santa Claus in that year's highest-grossing film, Disney's The Santa Clause. Next year, Allen voiced the iconic character of Buzz Lightyear in the Pixar hit Toy Story. In 1997, he starred in another Disney production, Jungle 2 Jungle, before reprising his role as Buzz in Toy Story 2 the following year. That year, Tim Allen ran into legal troubles once again after being arrested for DUI.

In 1999, he appeared in the sci-fi comedy Galaxy Quest alongside acting greats such as Sigourney Weaver, Alan Rickman, and Sam Rockwell. During the 2000s, Allen appeared in a range of Christmas films including Santa Clause 2, Santa Clause 3, and Christmas with the Kranks. During that decade, he also starred in Redbelt, Zoom, and The Shaggy Dog. To close out the decade, Tim Allen made his directorial debut with the film Crazy on the Outside.

In 2011, Tim Allen booked another leading role in a sitcom, this time with Last Man Standing. The series is about a conservative dad who is the only man in a house filled with women. Like Home Improvement, the show is a reflection of Allen's real-life experiences, as he's a Republican in a female-dominated family. In 2017, the series was canceled by ABC, but it was picked up by Fox in 2018. In the days leading up to ABC's cancelation of Last Man Standing, Tim Allen booked a role in yet another Christmas movie: El Camino Christmas. 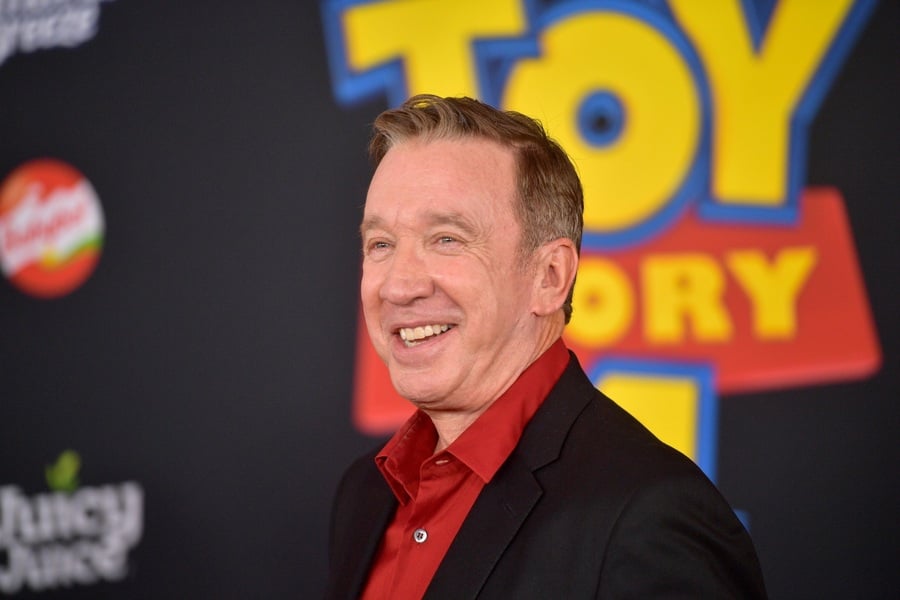 In 1994, Tim Allen topped the New York Times Bestseller's list with his book, Don't Stand Too Close to a Naked Man. In 1996, he followed up on his earlier success with the release of I'm Not Really Here.

Tim Allen is well known for his Republican political stance. He has appeared on Fox News shows to be interviewed by Sean Hannity, and he also supports Republican presidential candidates. After initially supporting John Kasich, he publically supported Donald Trump in the 2016 presidential election.

Other notable salaries include $5 million for Toy Story 2, $2 million for Galaxy Quest, and $12 million for Joe Somebody. He famously earned just $50,000 for the very first Toy Story.

Tim Allen also earns a substantial income through brand endorsements and advertisements. In 2009, he narrated the "Pure Michigan" TV and radio commercials for Travel Michigan. In 2010, he began narrating commercials for the Chevrolet Cruze. That year, he also used his voice acting talents to promote Campbell's Soup in their "It's Amazing What Soup Can Do" campaign.