What is Tilda Swinton's Net Worth?

Tilda Swinton is an Oscar-winning British actress who has a net worth of $14 million. got her start in the 80s, appearing in Derek Jarman's independent films "Caravaggio" and "The Last of England." Since then, she has appeared in a wide range of films, including "Orlando," "The Deep End," "Michael Clayton," "Julia," "We Need to Talk About Kevin," "Snowpiercer," "The Grand Budapest Hotel," and "Memoria." Swinton is known for her androgynous, chameleonic appearance and eclectic roles.

Tilda Swinton was born as Katherine Matilda Swinton on November 5, 1960 in London, England. Her mother was Judith Balfour, an Australian, while her father was Sir John Swinton, a retired British Army major general and the Lord Lieutenant of Berwickshire from 1989 to 2000. Swinton belongs to an ancient Anglo-Scots family that can trace its lineage back to the Middle Ages. Growing up, she attended the independent schools Queen's Gate School and West Heath Girls' School. Briefly, she also went to the coeducational boarding school Fettes College. Afterwards, Swinton volunteered in South Africa and Kenya for two years. She then enrolled at New Hall at the University of Cambridge, from which she graduated in 1983 with a degree in social and political sciences. While in college, she joined the Communist Party, and later the Scottish Socialist Party.

In 1984, Swinton joined the Royal Shakespeare Company in a production of "Measure for Measure." Later in the decade, she worked with the Traverse Theatre in Edinburgh, where she starred in Manfred Karge's "Mann ist Mann." She also appeared in the 1986 television miniseries "Zastrozzi: A Romance," based on the novel by Percy Bysshe Shelley.

Swinton made her feature film debut in 1986, playing Lena in Derek Jarman's historical drama "Caravaggio." She went on to appear in all of Jarman's subsequent films, which include 1987's "The Last of England," 1989's "War Requiem," 1990's "The Garden," and 1991's "Edward II." For her portrayal of Isabella of France in the lattermost film, Swinton won the Volpi Cup for Best Actress at the Venice Film Festival. She followed this with another acclaimed role in Sally Potter's loose Virginia Woolf adaptation "Orlando." Swinton reunited with Jarman in 1993 for his final two films, "Wittgenstein" and "Blue." Her subsequent credits included the erotic drama "Female Perversions"; the science-fiction film "Conceiving Ada"; the crime thriller "The Protagonists"; and the drama "The War Zone."

In the 2000s, Swinton began gravitating more towards roles in mainstream films. Early in the century, she appeared in Danny Boyle's adventure drama "The Beach," the thrillers "The Deep End" and "Vanilla Sky," and the Spike Jonze dramedy "Adaptation." Following roles in "Teknolust," "The Statement," and "Young Adam," Swinton reached a new level of international fame in 2005. That year, she appeared in four movies, including the acclaimed independent films "Broken Flowers" and "Thumbsucker" and the blockbuster fantasy film "The Chronicles of Narnia: The Lion, the Witch and the Wardrobe," in which she played the fearsome White Witch. 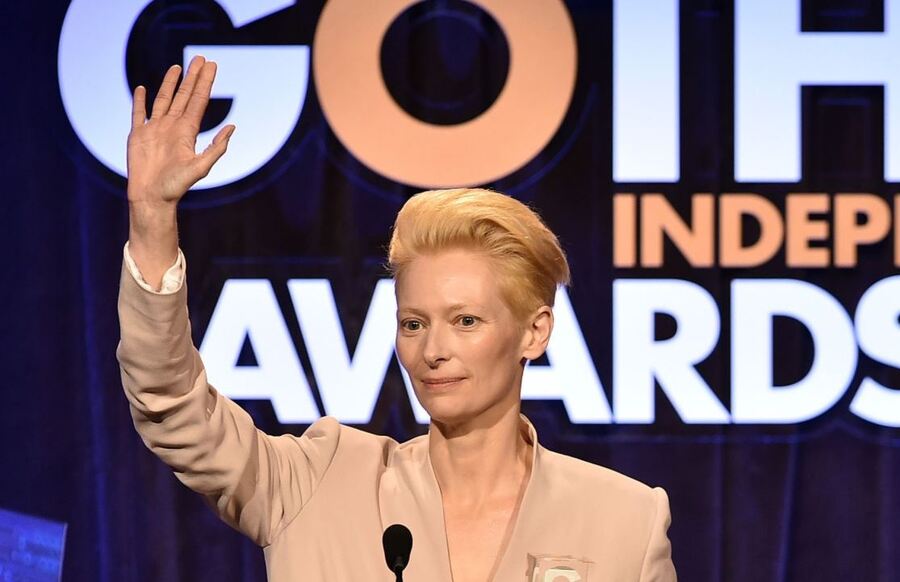 Swinton's star continued to rise in 2007, when she played the general counsel of a corrupt agricultural conglomerate in the legal thriller "Michael Clayton." Appearing opposite George Clooney and Tom Wilkinson, Swinton won the Academy Award for Best Supporting Actress for her performance. Following this success, she went on to appear in a plethora of films by major world filmmakers, with credits including Béla Tarr's "The Man from London"; the Coen brothers' "Burn After Reading"; David Fincher's "The Curious Case of Benjamin Button"; Erick Zonca's "Julia"; Luca Guadagnino's "I Am Love"; Jim Jarmusch's "The Limits of Control"; and Lynne Ramsay's "We Need to Talk About Kevin," for which she earned SAG, Golden Globe, and BAFTA nominations.

On the small screen, Swinton starred as Cissie Crouch in the 1990 six-part Scottish series "Your Cheatin' Heart." She subsequently appeared in episodes of the shows "Screenplay" and "Shakespeare: The Animated Tales," and narrated the 1994 television documentary "Visions of Heaven and Hell." In 1998, Swinton starred in the biographical BBC television film "Love is the Devil: Study for a Portrait of Francis Bacon." Her other television credits include episodes of "Getting On" and "What We Do in the Shadows." She has also done narration for the television documentaries "The Somme," "Galápagos," and "When Björk Met Attenborough."

Performance Art and Other Projects

In addition to acting, Swinton is recognized for her performance art. In 1995, along with producer Joanna Scanlan, she created a live art piece in London's Serpentine Gallery in which she displayed herself lying in a glass case. Swinton has since reproduced the piece in Rome and New York City. In 2012, she appeared in an outdoor video installation created by Doug Aitken for the Hirshhorn Museum and Sculpture Garden in Washington, DC.

Among her other projects, Swinton founded the film festival Ballerina Ballroom Cinema of Dreams, which was held in a ballroom on Scotland's Moray Firth in 2008. The next year, she collaborated with filmmaker Mark Cousins to create a traveling independent film festival, which involved a huge portable cinema attached to a truck they manually hauled through the Scottish Highlands. The pair repeated this feat in 2011. In 2013, along with Ian Sutherland McCook, Swinton co-founded Drumduan Upper School in Findhorn, Scotland.

In 1997, Swinton had twin children Honor and Xavier with her then-boyfriend John Byrne. Later, in 2004, she became romantically involved with artist Sandro Kopp. The family lives in Nairn in the Highland region of Scotland. Swinton identifies as queer. 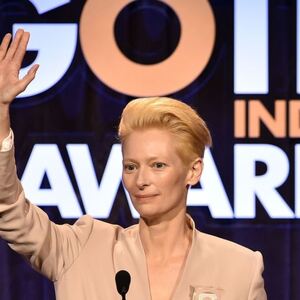