Tia and Tamera Mowry Net Worth

Tia and Tamera Mowry Net Worth: Tia and Tamera Mowry are twin actresses who have a net worth of $8 million dollars. The twins were born in 1978 in Gelnhausen, West Germany, and began their entertainment industry careers as kids. They appeared in beauty pageants and moved to California before their 13th birthdays to pursue acting.

As teenagers, they landed the starring roles on the popular series "Sister, Sister" after they were spotted watching their brother on the set of "Full House". "Sister, Sister" ran for six seasons on two networks, and following its end, the girls attended Pepperdine University to study psychology. They continued their acting careers, with appearances in "The Hot Chick", "Twitches", "Twitches Too", "Seventeen Again", "Strong Medicine" and their reality show, "Tia & Tamera", on the Style Network. Tia is also well known for her role on BET's hit show "The Game" and is the author of "Oh, Baby: Pregnancy Tales and Advice from One Hot Mama to Another". She has been married to husband Cory Hardrict since 2008 and has one child. Tia is an active basketball coach and is an animal rights advocate who enjoys a vegan diet. Tamera began hosting talk show "The Real" in mid-2013. She has been married to her husband, journalist Adam Housley, since 2011, and they have one son together. Tia is the youngest of the twins, born two minutes after Tamera. They have a younger brother, Tahj, who has also been involved in acting from a young age and starred on the series "Smart Guy". 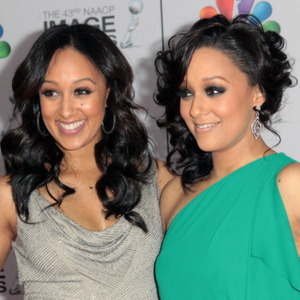