Thomas Brodie-Sangster Net Worth: Thomas Brodie-Sangster is an English actor who has a net worth of $3 million. He is perhaps best known for starring in the TV series Game of Thrones as Jojen Reed and the 2003 movie Love Actually. In 2020 he earned critical acclaim for his role in the Netflix series The Queen's Gambit.

Thomas Brodie-Sangster was born in Southwark, London, England in May 1990. His parents are both actors and Thomas Sangster is the second cousin of actor Hugh Grant. His first appearances acme in 2001 in the TV movies Station Jim and The Miracle of the Cards. In 2002 he made his television debut starring as Barney in the series Stig of the Dump. In 2004 he starred as Robert Nobel in the TV series Feather Boy. From 2010 to 2011 he provided to voice of Ferb in the TV series Take Two with Phineas and Ferb. Since 2013 Sangster has starred as Jojen Reed on the series Game of Thrones. He has also provided the voice of Ferb on Phineas and Ferb since 2007. He has starred in the movies Love Actually, Nanny McPhee, Tristan + Isolde, The Last Legion, Bright Star, Nowhere Boy, Hideaways, Albatross, Death of a Superhero, The Baytown Outlaws, and The Maze Runner. Thomas won a Golden Nymph and the 2013 Monte-Carlo TV Festival for Mini-Series – Best Performance by an Actor. He has been nominated for a Satellite Awards and four Young Artist Awards. He plays bass guitar in the band Winnet and his mother is the lead singer. 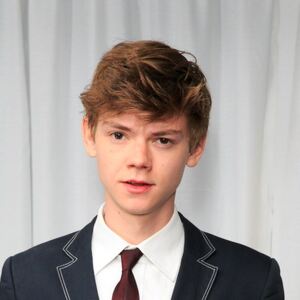