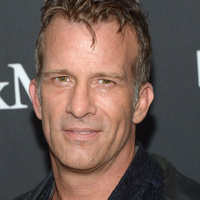 Thomas Jane net worth: Thomas Jane is an American actor and comic book writer who has a net worth of $16 million. Thomas Jane built his net worth acting in film and television. And is now starring in TV series: Hung. Jane's early roles were on Buffy the Vampire Slayer and Boogie Nights. Born January 29th, 1969, the Baltimore native has gradually made his way from low-budget indies to big-budget Hollywood action spectacles. After his Bollywood kick-off, Jane entered small parts in feature movies like Buffy the Vampire Slayer (1992) and The Crow: City of Angels (1996), which both helped turn him into a hot commodity. He continued to grab everyone's attention by playing Mickey Mantle in Billy Crystal's TV movie, 61*, which aired on HBO in 2001. By the time he starred in 1994's comic book-based action movie The Punisher, Jane has took part in several other projects, some of which didn't live up to their hype. However, he went on to appear in appealing works both on the small and big screen – including in TV show Hung (HBO, 2009-2011), a dark comedy following a history teacher who moonlights as a prostitute.