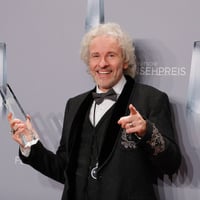 Thomas Gottschalk net worth: Thomas Gottschalk is a German actor and television and radio host who has a net worth of $130 million. Thomas Gottschalk was born in Bamberg, Bavaria, Germany in May 1950. He is best known as the host of the television series Wetten, dass..? which aired from 1982 to 2011 in Germany, Switzerland, and Austria. He has hosted the TV series Na sowas!, Gottschalk Late Night, Gottschalk & Friends, Ein Herz fur Kinder, Gottschalk Live, and Das Supertalent. Gottschalk has also starred in the movies Zookeeper, Late Show, Sister Act 2: Back in the Habit, Driving Me Crazy, Harry and Harriet, Think Big, and Three Crazy Jerks. He has also served as the testimonial personality for Haribo confectionery TV commercials. Gottschalk won 1 million Euros for charity in the 2008 German celebrity version of Who Wants to Be a Millionaire?.