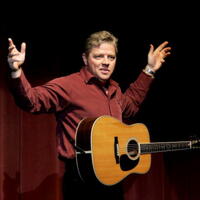 Thomas F. Wilson net worth: Thomas F. Wilson is an American actor, writer, director, stand-up comedian and voice over artist who has net worth of $4 million. Thomas F. Wilson was born in Philadelphia, Pennsylvania and went on to attend Arizona State University, where he majored in International Politics. He then went on to attend the American Academy of Dramatic Arts and launched his stand-up comedy career. He began his professional on-camera career in the 80s, and became a household name when he was cast as Biff Tannen in "Back to the Future". He went on to appear in the rest of the "Back to the Future" trilogy, and worked on the spin-off cartoon as a voice over artist. Since then, he has worked steadily appearing in film and television productions, and providing voice over work for multiple cartoons. Some of his projects include, "Action Jackson", "Boris and Natasha: The Movie", "Camp Nowhere", "Born to Be Wild", "The SpongeBob SquarePants Movie", "House Broken", "Rio", and "Atlas Shrugged: Part II".