Teyonah Parris Net Worth: Teyonah Parris is an American actress who has a net worth of $2 million. Teyonah Parris studied at the South Carolina Governor's School for Arts and Humanities. Parris made her on-screen debut in the short film "Empire Corner" in 2010 as Alma. She reprised that role in a short called "Wu is Dead" later that same year.

Also in 2010, Parris played Melinda Gossett in the "Double Jeopardy" episode of the hit CBS series "The Good Wife". She played Riva in "How Do You Know" before taking a two-year hiatus from on-screen acting. Parris returned when she was cast as Dawn Chambers in the hit AMC show "Mad Men" as Dawn Chambers. She has appeared in more than 20 episodes of the show since her 2012 casting, most recently in the 2014 episode "Waterloo". Parris has also appeared as Karen Branston on "CSI: Crime Scene Investigation", Coco Conners in "Dear White People", Mika in "A Picture of You", Wanda in "They Came Together", and Missy Vaughn in three episodes of "Survivor's Remorse" in 2014. The film "Dear White People" has generated some media buzz as it focuses on African-American students studying at Ivy League universities. Parris is slated to appear in 2015's "Five Nights in Maine" as Penelope. Growing up, Parris identified as both a beauty queen and a tomboy. She won the Ms. Lower Richland High School title as a freshman. 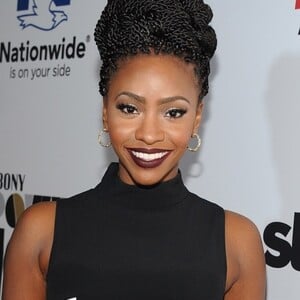