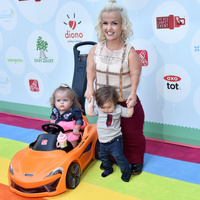 Terra Jole net worth: Terra Jole is an American actress, impersonator, and reality television personality who has a net worth of $500 thousand dollars. Terra Jole was born in Comal County, Texas. She has dwarfism and stands 4′ 2″ tall. She began her professional on-camera career in 2001, and has since appeared in such projects as "My First Day", "Tales from Beyond", "CSI: Crime Scene Investigation", "Midgets and Mascots", "Buddy Bear's Musical Adventure Happy and You Know It", "Jackass 3D", and "The Hungover Games". She is most widely recognized for her "Mini Britney" and "Mini Gaga" impersonations, and has been featured on a number of tours, including Insane Clown Posse's "Twizted Tour" and Miley Cyrus' World Tour. She is currently starring on the reality series, "Little Women: LA", which follows the lives of 6 small women as they go about their daily lives in a world built for bigger people. She is also an executive producer for the series.