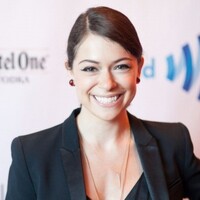 Tatiana Maslany net worth: Tatiana Maslany is a Canadian actress who has a net worth of $3 million. She is best known for starring in the television series Orphan Black, The Nativity, Being Erica, and Heartland. In 2013, she won an ACTRA for her role as "Claire" in the film Picture Day, and a Phillip Borsos Award for her performance in the film Cas & Dylan. Other notable films starring Maslany are Diary of the Dead and Eastern Promises, which she narrated. For the hit Canadian science fiction thriller, Orphan Black, she has received widespread critical acclaim, winning two Critics' Choice Television Awards, a TCA Award, a Canadian Screen Award, and has also received Golden Globe and SAG nominations. She was born in 1985 in Regina, Saskatchewan, Canada. While attending high school, she found paying acting jobs that allowed her to travel to Winnipeg, Edmonton, Calgary, and Vancouver with her parents' approval. She would work for a few months at a time and then return to school in Regina. After completing high school, she spent some time doing theater performances and traveling before settling in Toronto at the age of 20. She started working as an improv comedian and did that for 10 years before landing a role in the CBC series, Heartland. Throughout her career she has appeared in over 30 films and 20 television series. Maslany has been dating Welsh actor Tom Cullen since 2011. The two met while filming the BBC miniseries World Without End and have attended various events together, including the Toronto International Film Festival and the 71st Golden Globe Awards, at which Maslany was a nominee.