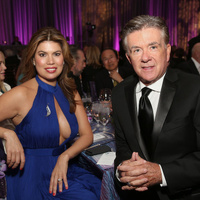 Tanya Thicke net worth: Tanya Thicke is an American actress and reality television personality who has a net worth of $1 million dollars. Tanya Thicke, also known as Tanya Callau, was born in Bolivia. She is probably most famous for being the wife of Canadian actor, Alan Thicke, who she married in 2005. Alan Thicke is most widely recognized for his work on the popular sitcom, "Growing Pains". Tanya Thicke is also the stepmother of actor Brennan Thicke, musician Robin Thicke, and Carter Thicke, who was one year old when she married Alan Thicke. She has appeared in the film, "The Princess Diaries 2: Royal Engagement" and on the reality series, "Celebrity Wife Swap". She is currently co-starring on the new reality series, "Unusually Thicke", which follows Tanya, Alan, and Carter throughout their daily lives. It also chronicles, Tanya's interest in having a child, which would require Alan Thicke to reverse his vasectomy. The show is currently airing on the Canadian channel, Slice.