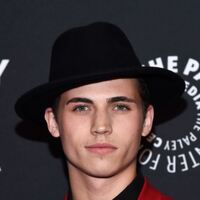 Tanner Buchanan net worth: Tanner Buchanan is an American actor who has a net worth of $1 million. He is best known for starring on the television series Designated Survivor, Cobra Kai, and Game Shakers.

Tanner Buchanan was born in 1998. He made his debut in 2010 in an episode of the television series Modern Family. From 2016 to 2018 he starred as Leo Kirkman on the TV series Designated Survivor. Buchanan starred as Mason Kendall on the series Game Shakers from 2015 to 2019. In 2018 he began starring as Robby Keene on the television series Cobra Kai. Tanner Buchanan has also had recurring roles on the TV series The Goldbergs as Evan Turner from 2013 to 2014, Girl Meets World as Charlie Gardner in 2015, The Fosters as Jack Downey in 2016, and Fuller House as Chad Brad Bradley in 2017. He has appeared in films including Jake Squared, The Heyday of the Insensitive Bastards, Anything, and Chance.