Tab Hunter Net Worth and salary: Tab Hunter was an American actor, singer and author who had a net worth of $10 million at the time of his death in 2018. Born Arthur Andrew Kelm on July 11, 1931, in New York City, he reached the peak of his career in the bloom of Hollywood's Golden Age.

With his fabricated name and Malibu-beach looks, Hunter became an idol for 1950s teenagers who simply adored his boy-next-door persona and physique. But that didn't mean he won the nods from critics. A 15-year old Hunter lied his way into the Coast Guard, three years later to appear in Joseph Losey's racial prejudice flick "The Lawless" (1950). This was also when agent Harry Wilson named him Tab Hunter, having previously said "We got to tab you something". At 21, he became a true "beefcake" after shedding most of his clothes in the low-budget romance "Island of Desire" (1952), opposite Linda Darnell. An instant success among the masses, Tab went on to star in over 40 major motion pictures, including Battle Cry (1955), That Kind of Woman (1959), Ride the Wild Surf (1964), The Loved One (1965), The Life and Times of Judge Roy Bean (1972), and let's not forget the Academy Award-nominated Damn Yankees (1958). The start of the 1960s saw Hunter starring as a bachelor newspaper cartoonist in his own sitcom, The Tab Hunter Show (NBC, 1960-1961). He went on to guest star in dozens of television shows, and he earned an Emmy nomination for his performance opposite Geraldine Page in Playhouse 90's Portrait of a Murderer. After disappearing from the screen for five years, Tab's film career took off once again in the 1980s/90s as he starred in films like John Waters' Polyester (1981). Behind the cameras, Tab worked with Allan Glaser on the production of Lust in the Dust (1985) and Dark Horse (1992). What's more, Tab Hunter can also add best selling author to his list of credits.

He published his autobiography "Tab Hunter Confidential", which became a national best seller and garnered critical praise from critics. Tab Hunter died on July 8, 2018 at the age of 86 at his home in Santa Barbara. 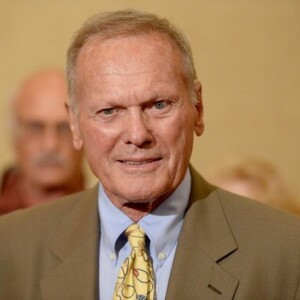