T.J. Holmes Net Worth: T.J. Holmes is an American journalist and television personality who has a net worth of $3 million. T.J. Holmes was born in West Memphis, Arkansas in August 1977. He graduated from the University of Arkansas with a broadcast journalism degree. He started his career in Joplin, Missouri at KSNF as a producer, weekend anchor, and assignment reporter.

In 2002 he joined KTHV CBS affiliate in Little Rock, AR as a general assignment reporter and weekend anchor. He moved to KNTV NBC affiliate in San Francisco in 2003 and anchored the 5 a.m. evening news. During this time he covered the 2004 Olympics in Athens, Greece, the recall election featuring Arnold Schwarzenegger, and the double murder trial of Scott Peterson. In 2006 Holmes joined CNN. He started co-anchoring CNN Saturday & Sunday Morning and then went solo in 2010. He covered the Deepwater Horizon oil spill, Virginia Tech shootings, September 11th 10 year anniversary, Saddam Hussein's execution, and more. Holmes signed with BET in 2011. He became the host of the new original series Don't Sleep in 2012. In 2013 he left BET and Don't Sleep was cancelled. He made a brief return to CNN in 2013 and still appears on MSNBC. In 2011 T.J. was named to The Root 100 List of Most Influential Black Americans. He married Marilee Fiebig in 2010 and the couple had a daughter in 2013. 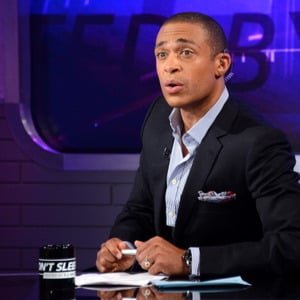