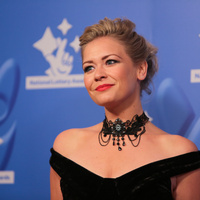 Suzanne Shaw net worth: Suzanne Shaw is an English actress, singer, and reality television personality who has a net worth of $3 million dollars. Suzanne Shaw was born in Bury, Greater Manchester, England, and was originally focused on a career in dance. She began studying ballet when she was two and then added acting lessons to her training. She appeared in her first musical, "Annie", when she was five. By the time she was nine, she was appearing in musicals in the West End. She went on to graduate from Oldham College where she earned a BTec National Diploma in Performing Arts. In 2000, she appeared on the reality series "Popstars", and became one of the winners who formed the group, Hear'Say. The group was immensely popular, but went their separate ways in 2002. She has gone on to steady work in musicals, as well as appearing in such film and television projects as "Horrid Henry the Movie", "The Court", "The Bill", and "Dancing on Ice". She has also served as a presenter/host for various game shows and awards programs.