Susana Gimenez Net Worth: Susana Gimenez is an Argentine talk show host, actress, and model who has a net worth of $100 million. Susana Giménez was born in Buenos Aires, Argentina in January 1944. Gimenez is one of the biggest celebrities in Argentine television. She graduated from La Anunciata Collegiate as a teacher but never worked as one.

She has been married four times and has one child and two grandchildren. Susana had to pay $10 million to her ex-husband in 1998 as a divorce settlement. She hosts the show Susana Gimenez which is a highly rated variety show somewhat like the Oprah Winfrey or Raffaella Carra shows. She was listed in the Guinness Book of Records due to the high volume of letters and phone calls received in her show. Gimenez won the Golden Martin Fierro Award in 1997 and the INTE award for best Hispanic American TV hostess in 2002. Her first appearance came in the 1968 film En mi casa man do yon. As a film actress she mainly starred in adult comedies often appearing with Alberto Olmedo, Jorge Porcel, and Moria Casan. Susana has acted in 10 plays and more than 30 films. She started the magazine Susana in 2008 and is featured on the cover of each issue. She has also created her own fashion doll and endorses two fragrances. 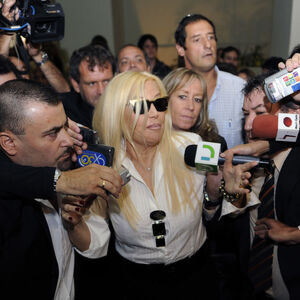