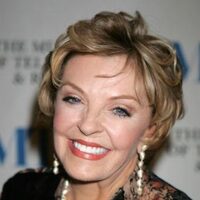 Susan Seaforth Hayes net worth: Susan Seaforth Hayes is an American actress who has a net worth of $5 million. Susan Seaforth Hayes was born in Oakland, California in July 1943. She is best known for starring as Julie Williams on the soap opera Days of Our Lives from 1968 to 2014. From 1984 to 2010 she starred as Joanna Manning in the soap opera The Young and the Restless. From 2011 to 2012 Hayes starred as in the TV series Venice the Series and in 1999 she starred as D.A. Patricia Steele in the series Sunset Beach. Hayes has also starred in the movies California, Gunfight at Comanche Creek, Billie, If He Hollers, Let Him Go!, Angel in My Pocket, Wrestling with God, Dream Machine, and Knight to F4. In 1997 she won a Soapy Award for Days of Our Lives. Seaforth Hayes was nominated for Daytime Emmy Awards for Outstanding Actress in a Daytime Drama Series from 1975 to 1979.