Sunil Shetty Net Worth: Sunil Shetty is an Indian actor and producer who has a net worth of $10 million. Born on 11 August 1961 in Mulki, Karnataka, India, he made his career beginnings in the action genre in the early 90's. However, it was with his turn in the 1992 feature Balwaan that he commenced his film career.

He has since continued to cement himself as an actor, especially with his portrayal in "Dilwale" (1995) that earned him nomination for Best Supporting Actor. Other of his television credits include "Mohra", "Border", and a series of movies having a patriotic content like "LOC Kargil", "Refugee", and "Qayamat". Sunil Shetty, who proved successful playing in both dramas and comedies, went on to set up his own Popcorn Motion Pictures Ltd company, where he attempted to produce his own films. Such features were "Rakht: What If You Can See the Future" and "Bhagam Bhag". Aside from the movie industry, he also felt passionate about playing cricket. His love towards the game led him to join the Mumbai Heroes cricket team, where he coaches as a captain. Furthermore, his interest in the hotel industry made him a successful hotelier owning restaurants specializing in delicious Udupi platters and menus. 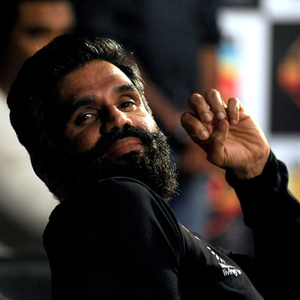