What is Steven Seagal's Net Worth and Salary?

Steven Frederic Seagal was born on April 10, 1952, in Lansing, Michigan. When he was five years old, he moved with his parents Patricia and Samuel to Fullerton, California. He attended Buena Park High School in Buena Park, California, and continued his education at Fullerton College from 1970 to 1971.

He began studying martial arts when he was a child, practicing Shito-ryu karate and aikido. At the encouragement of a friendly Japanese coworker at a Garden Grove dojo, Seagal visited Japan for the first time when he was seventeen years old. In 1974, he met Miyako Fujitani, the daughter of an Osaka aikido master that was teaching aikido in Los Angeles. Miyako was also a second-degree black belt. Seagal moved to Japan with her when she decided to return to Osaka, where he taught at the school owned by her family (he is often stated to have been the first non-Asian to open a dojo in Japan).

He first returned to Taos, New Mexico, where he opened a dojo with his student Craig Dunn, before going back to Japan. His second return to the United States was in 1983, when he opened an aikido dojo with student Haruo Matsuoka in West Hollywood, California. They parted ways in 1997.

While he left his partners in charge of the dojos they had opened together, Seagal also began pursuing other ventures, one of which were Hollywood action films. Seagal started making important Hollywood contacts who helped him land jobs as a martial arts co-coordinator for the films "The Challenge" and "Never Say Never Again." His first time acting was in the film "Above the Law" was directed by Andrew Davis, and was released in 1988. It was a success, and released the subsequent films "Hard to Kill" (1990), "Marked for Death" (1990), and "Out for Justice" (1991). All of these were a box office success, and they helped to cement his status as an action hero. His mainstream breakthrough came with the 1992 film "Under Siege," also directed by Andrew Davis. The film would went on to earn $156.4 million worldwide. In 1994 Seagal made his directorial debut with the movie "On Deadly Ground." The film (which he also co-starred in) was a departure for him because it dealt heavily with spiritual and environmental issues. It was poorly received by critics, but Seagal considers it an important moment in his career. 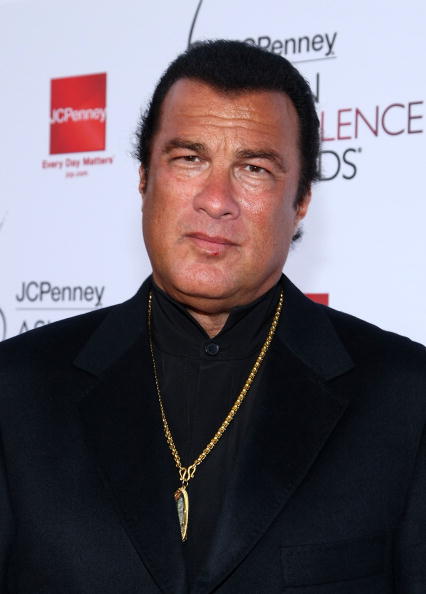 In addition to his film career, Seagal has appeared on television as well. He starred in the A&E reality television series "Steven Seagal: Lawman" in 2009, and also produced and starred in the 13-episode series "True Justice" in 2011. Seagal, who plays the guitar, has also enjoyed a music career, with his songs having been featured in several of his films. He has released two albums which have featured songs with artist such as Stevie Wonder and Tony Rebel.

Seagal is the founder of Seagal Enterprises. The company marketed an energy drink "Steven Seagal's Lightning Bolt" in 2005, although it has now been discontinued. He has also marketed products such as aftershave and a knife range. He joined the newly-formed Russian firearms manufacturer ORSIS in 2013, promoting the company and also lobbying on behalf of them for easing on US import restrictions on Russian sporting firearms.

In addition to his American citizenship, Seagal also holds Serbian and Russian citizenship. He owns several properties, including in Louisiana, Colorado and California. Seagal has a total of seven children from four different relationships. Together with first wife Miyako Fujitani, he has two children. They divorced after Seagal left her in Japan and moved back to the United States. Following his divorce from Fujitani, he was briefly married to actress Adrienne La Russa in 1984, but the marriage was annulled that same year. Actress Kelly LeBrock gave birth to his daughter in early 1987, and the couple married later that year. They had two more children before divorcing in 1994. He later married Mongolian dancer Erdenetuya "Elle" Batsukh, and together they have one son.

In early 2018, Seagal took to his social media accounts to let his followers know about a cryptocurrency called "Bitcoiin2Gen." Unfortunately, he failed to disclose that he had been "promised" $250,000 in cash plus another $750,000 worth of Bitcoiin2Gen to promote the crypto's IPO, which is a big no-no for the United States Securities and Exchange Commission (SEC). After meeting with regulators, Seagal agreed to pay $157,000 in disgorgement, plus another $157,000 in penalties, all without actually "admitting or denying" the SEC's allegations. He also agreed to not promote any cryptocurrencies or securities on social media for a period of three years.