From 1964 to 1965 he starred as Buck Singleton on the TV series The Baileys of Balboa. Holloway starred in the movies Casey at the Bat, American Madness, Rockabye, Hard to Handle, Alice in Wonderland, Strictly Dynamite, Gift of Gab, The Merry Widow, 1,000 Dollars a Minute, Palm Springs, The Woman I Love, Varsity Show, St. Louis Blues, Nick Carter, Master Detective, Remember the Night, The Blue Bird, Meet John Doe, The Great Awakening, Don't Get Personal, A Walk in the Sun, Sioux City Sue, The Beautiful Blonde from Bashful Bend, Kentucky Rifle, The Adventures of Huckleberry Finn, Live a Little, Love a Little, and Thunder & Lightning. His distinctive tenor voice is best remember as the voice of Mr. Stork in Dumbo, Cheshire Cat in Alice in Wonderland, Winnie the Pooh, Adult Flower in Bambi, Roquefort in The Aristocats, and Kaa in The Jungle Book. Holloway won a Grammy Award in 1975 for Winnie the Pooh and Tigger Too. Sterling Holloway passed away on November 22, 1992 of cardiac arrest at 87 years old. 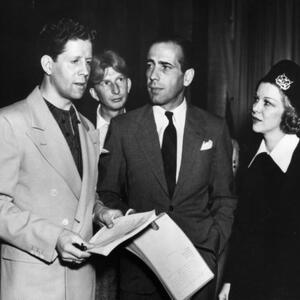