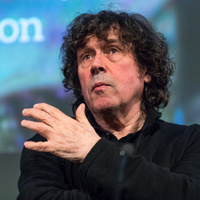 Stephen Rea Net Worth: Stephen Rea is an Irish actor who has a net worth of $10 million. Stephen Rea was born in Belfast, Northern Ireland in October 1946. He graduated from the Queen's University of Belfast and trained at the Abbey Theatre in Dublin. He acted in the Focus Company in the late 1970s. Rea's first television appearance came in the series Crossroads in 1964. His film debut came in 1970 in Cry of the Banshee. From 1975 to 1976 he starred as Carter Brandon in the series I Didn't Know You Cared. In 1990 Stephen starred in the series Not with a Bang as Colin Garrity. From 2001 to 2002 he narrated the TV series Horrible Histories. Rea starred in the 2011 television mini-series The Shadow Line as Gatehouse. In 2013 he starred as Letts in the series Utopia. He has starred in many films including Angel, The Company of Wolves, Loose Connections, Life is Sweet, The Crying Game, Bad Behaviour, Angie, Princess Caraboo, Interview with the Vampire, Michael Collins, Fever Pitch, Hacks, This Is My Father, The Musketeer, On the Edge, Feardotcom, The Halo Effect, Breakfast on Pluto, The Good Shepherd, V for Vendetta, Nothing Personal, Underworld: Awakening, and Utopia. Rea has been nominated for an Academy Award and a Golden Globe. He serves as an ambassador for UNICEF Ireland. Stephen was previously married to Dolours Price and the couple had two sons together.