Stella Stevens Net Worth: Stella Stevens is an American film, television, and stage actress who has a net worth of $10 million. Born Estelle Caro Eggleston on October 1, 1938, in Yazoo City, Mississippi, US, she has been a popular screen siren in the early 1960s. Blessed with seductive looks, Stevens first made it in the world of modeling.

Being featured in Playboy's pictorials in 1965 and 1968, Stella Stevens became the magazine's Playmate of the Month in January of 1960. Next, she was included in Playboy's 100 Sexiest Stars of the 20th Century, appearing at number 27. As one of the most photographed women in the world at the time, Stevens soon entered the world of acting. She made her first appearance in the 1959 modest musical Say One for Me, playing the minor role of a chorus girl. Only one year after her debut, she won a Golden Globe Award for New Star of the Year – Actress. Ever since, she lent her sex appeal to such popular films as The Nutty Professor (1963), The Silencers (1966), Where Angels Go, Trouble Follows (1968), The Ballad of Cable Hogue (1970), and The Poseidon Adventure (1972), among others. Stevens was also dominating the small screen starring in both TV series and miniseries, like Alfred Hitchcock Presents (1960, 1988), Bonanza (1960), The Love Boat (1977, 1983), Murder, She Wrote (1985), Magnum, P.I. (1986), Highlander: The Series (1995) and Twenty Good Years (2006). Having continued to land appearances well into her seventh decade, Stella Stevens ones again proves her fans that she is a true professional still possessing a great talent and apparent good humor. 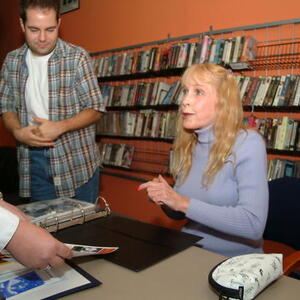