What is Stanley Tucci's net worth and salary?

Stanley Tucci is an American actor, writer, film producer, and director who has a net worth of $25 million. He is known for roles in films such as "The Lovely Bones," "The Hunger Games," "Burlesque," and "The Devil Wears Prada." Stanley also stars on the critically-acclaimed CNN travel series "Searching for Italy."

Stanley Tucci was born on November 11, 1960, in Peekskill, New York. He is the oldest of three children of Joan and Stanley Tucci, Sr. The family lived in Florence, Italy for a year when he was a child in the 1970s. In high school, Tucci was on the baseball and soccer teams, although his main interest was in the high school drama club, which he was a member of with actor and classmate Campbell Scott, the son of actor George C. Scott. After high school, Tucci enrolled at SUNY Purchase to study acting. Ving Rhames was his classmate. In fact, Tucci was the person who gave Ving, whose real name is Irving, the nickname by which he is professionally known. Tucci graduated from college in 1982.

Young college grad Stanley Tucci got his big break (and his Actors' Equity card) thanks to his friend Campbell Scott's mom, actress Colleen Dewhurst. She got her son and Tucci small parts in the Broadway play she was starring in at the time, called "The Queen and the Rebels." The play premiered in late September 1982.

Then, in 1985, Tucci got his big break when he was cast in his debut film, "Prizzi's Honor." Since then, he's gone on to work on "The Pelican Brief," "Beethoven," "Kiss of Death," "Road to Perdition," and "Big Night, the 1996 film he starred in, co-wrote with his cousin, and co-directed with Campbell Scott, which premiered at the Sundance Film Festival. His sister and mother were also in the film. Tucci won the Best First Screenplay award for "Big Night" at that year's Independent Spirit Awards.

In "The Lovely Bones," Tucci played serial killer George Harvey. He was nominated for the Oscar and Golden Globe for Best Supporting Actor for his work in the haunting film based on the novel by Alice Sebold. Tucci won the Emmy for his role in "Winchell." He also starred in "Billy Bathgate," "It Could Happen to You," "Prelude to a Kiss, "Made in Manhattan," "Julie & Julia,", "Captain America: The First Avenger," "The Hunger Games," "The Hunger Games Catching Fire," "Percy Jackson: Sea Of Monsters," "Transformer: Age of Extinction," "Transformers: The Last Knight," and, of course, the iconic "The Devil Wears Prada." 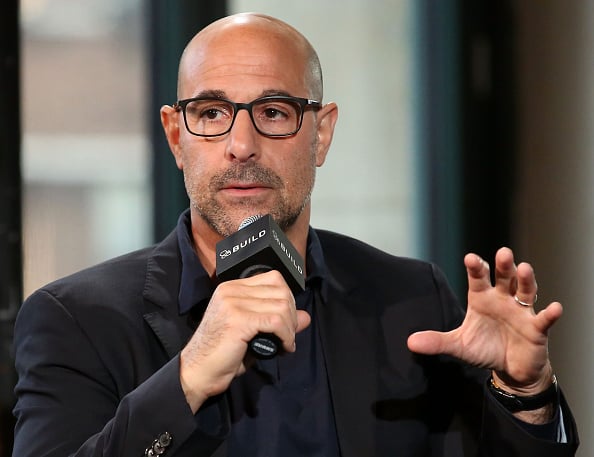 In the fall of 2012, The Tucci Cookbook was released.

In the summer of 2020, Tucci was announced to be starring in the Spanish language limited series "La Fortuna" alongside Spanish actors Álvaro Mel and Ana Polvorosa. The six-episode thriller is based on the graphic novel "The Treasure of the Black Swan," by Paco Roca and Guillermo Corral. Tucci plays the character Frank Wild.

Tucci is in production on a movie called "The Man Who Saved Paris." Set in the 1940s, the owner of the most successful brothel in Paris is asked by the government to restore the city's image after the war.

Tucci has been nominated for a Golden Globe Award three times and won twice – for his title role in "Winchell" in 1998, and for his supporting role as Adolf Eichmann in 2001's "Conspiracy." Both were films for HBO. He also received a Screen Actors Guild Award nomination for "Winchell." He was nominated for a Tony Award as Best Actor in a Play for his role as Johnny in the 2002 revival of Terrence McNally's "Frankie and Johnny in the Clair de Lune." In July 2006, Tucci made an appearance on the USA Network TV series "Monk," in a performance that earned him a 2007 Emmy for Outstanding Guest Actor in a Comedy Series.

In 1995, Stanley and Kate Spath married. She was a social worker and the ex-wife of Alexander Scott, the older brother of Tucci's friend Campbell Scott. The couple had three children and raised Kate's two kids from her previous marriage to Scott. In 2002, Tucci left Kate for Edie Falco. When his relationship with Falco ended he returned to Kate and their kids. Katherine Louise Spath-Tucci died in 2009 after a lengthy battle with breast cancer.

In September 2012, Tucci married Felicity Blunt, a British literary agent. She is actress Emily Blunt's older sister. Emily and Stanley co-starred in "The Devil Wears Prada."  Stanley first met Felicity at the premiere of "The Devil Wears Prada," where she spent most of the night talking to his wife Kate. Emily re-introduced her sister and Tucci at her wedding to actor John Krasinski.  Tucci and Blunt live in London with Stanley's children: twins Isabel and Nicolo, Camilla, and the couple's son, Matteo Oliver (born Janaury 2015) and daughter Emilia Giovanna (born April 2018).

In the fall of 2013, Tucci sold his South Salem, New York home. The property is 5,405 square feet and sits on six acres of land. It has five bedrooms and four bathrooms and was originally built in the mid-1770s.  Tucci expanded and modernized the house, though it still features some colonial touches.  The property has a guest house, and a pool surrounded by a flagstone terrace.  The secluded property sold for $1.8 million. 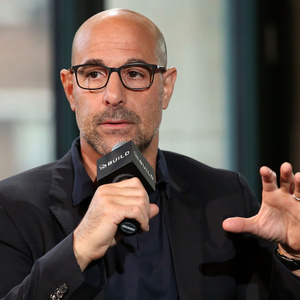