Sosie Bacon Net Worth: Sosie Bacon is an American actress who has a net worth of $250 thousan. Sosie Bacon was born in March 1992. Sosie is the daughter of actors Kevin Bacon and Kyra Sedgwick.

She had a normal upbringing and her parents did not want her to get into acting. Sosie's film debut came as a 10 year old Emily in the 2005 film Loverboy which her father directed. She starred as Charlie in the TV series The Closer in 2009. Sosie's upcoming projects include the films Wishin' and Hopin' and Off Season and the short Another Life. In The Closer she played the niece of her mother's character Deputy Chief Brenda Leigh Johnson. Sosie has studied at Brown University and the musical theater company CAP21. She acted in the Off-Broadway musical Fiction in Photographs in 2012. Sosie was crowned Miss Golden Globe 2014 taking over for Francesca Eastwood in assisting with the Globes ceremony. 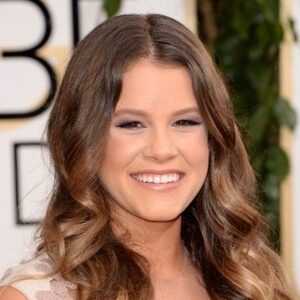