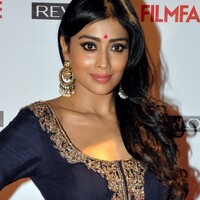 Shriya Saran net worth: Shriya Saran is an Indian actress and model who has a net worth of $10 million. Shriya Saran was born in Dehradun, Uttarakhand, India in September 1982. She has performed in Hindi, Telugu, Tamil, and Malayalam films and also a few in English and Kannada. She got her break appearing in a music video from Renoo Nathan in 2001. She made her film debut the same year in the movie Ishtam and had success in Santhosham in 2002. She starred in the highest grossing Tamil film Sivaji in 2007 and the same year gained critical acclaim for the Bollywood film Awarapan. She played the lead role in her first English movie The Other End of the Line in 2008. She starred in the movie Midnight's Children in 2012. Saran has been a brand ambassador in India for health and beauty products as well as the Celebrity Cricket League. She opened up a spa in 2011 that helped employ people with visual challenges. Saran has won many awards and was honored with the Shakthi Award by the Sri Lankan People in 2012. She ranked 7th on The Times of India's 50 Most Desirable Women list in 2013.